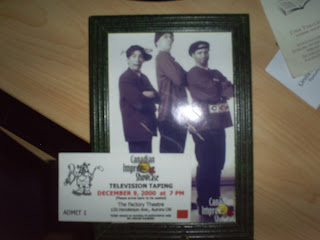 I came across this photo (me, left with fish hat) and a Canadian Improv Showcase ticket stub from when I was a Principal Actor, the show's original Producer and Co-writer ( 2 years TV & live shows), as well as handled the booking including gigs at Second City Theatre and across southern Ontario. I actually Produced and Performed while still in film school and a single Dad a tough juggling act in any circus!

Just before I came on the scene as Producer, they (Dick Wad and his original "Executive" Producer whom he eventually dumped via creating accusations about missing funds - like there was any! Ha!) were a bit lost and full of improv tv show knowledge but only from watching!  Anyway, I originally came on board as a performer and these Einsteins  had booked the Good Guys in Bad-Times Theatre (or something like that) in Toronto to tape a pilot episode, but they assumed all the tv production students they had asked to be camera operators and sound record technicians etc would have equipment - and they showed up without any! Hellllo!

It would have died then had I not approached Aurora Cable tv ( I knew then station Manager Steve Mitchell) to come tape at the Factory Theatre lieu of free season of taped shows for their station.So we got a multiple camera shoot complete with live switcher and a production truck, Director, Production Assistants, sound & lighting crew (theatre) and Cam Operators at no cost! Thank-you! And we even charged the live audience to attend so we made money making a pilot too! The "fun" ended for me when the then 20 something, but already rapidly balding "co-founder", turned on me next with similar crap as the Executive predecessor, and when I wouldn't play footsie with his ego and I questioned the turnover of actors seemingly being replaced with high-schoolers and the creative direction the show was taking he made it easy to take a walk. They went no-where. Too bad, great concept - spoofing Canadianisms through Canadian talent.

This is when I first started doing Don Cherry spoofs where the audience would make him an expert on anything from hair dressing to figure skating instead of hockey in character! ha...Justin Renwick (middle in pic) a noted Newmarket musician ( Mumble Ducks) was a phenomenal talent and impersonator though! The other guy was a complete dick.


Every now and then you just have to stop and give your head a shake. Like recently our request to once again have our annual youth road hockey event held on Main St in Newmarket, which it was last year for the first time in its 8 soon to be 9 year history, was apparently turned down. Actually, I don't even think it was even raised. Why, I'm not sure, but I do know they managed to okay closing the street for some kind of Bollywood celebration as well as a multicultural or international festival, but seems to me the very Canadian tradition of road hockey was not considered important enough.


So instead the youths of Newmarket, Bradford, Aurora and wherever else they come from this year will have to play on substandard areas too small really for quality play. The location they will now be forced to use is too narrow for passing and too close to the next playing area unless we come up with a last minute solution. Of course the outdoor stage of the new " Riverwalk Commons" for comedy play-by-play and performers will be nice and we can facet a play area for younger non-tourney players there, but really nearby stones throw Main St is where it's at for road hockey.

We'll pull this off, but I'm extremely disappointed that the downtown association apparently doesn't deem this event, with the potential to grow ginormous, important enough or worthy enough. It's not enough I guess that the longest running annual road hockey tourney in Ontario allows kids to participate for free, feeds all tourney players and also gives out a $1,000 education award  to one worthy youth. Heck, last year we even reimbursed the Main St restaurants $5 each for feeding kids and put free entertainment in their cafes.They loved us. So what happened? Hmmmm..( picture me thinking here)

Given the attention and support all the other events seem to get like Hoe Downs - which by the way Aurora was never a country music town - and the "multicultural festival" start-ups, this one should have been a no - brainer years ago to get behind, yet here we are today with a sub-standard solution to a very worthy and marketable event, and a few people calling the shots about its location.

All the businesses I've spoken with were/are happy to have it on their street and were surprised it was even an issue as it brought some business on a winter Saturday and was a good community event - they welcomed it in fact - yet it wasn't even raised alongside these upstart events that garnered support  - such as the " Car Show Thursdays" and this "Bollywood" festival idea. Listen I have nothing against Bollywood , but really what connection does it have to Newmarket? What history? Road Hockey has plenty and is a Canadian youth tradition! And you'd be surprised how many "multicultural" kids come play!
Too bad, it's one Canadian tradition I hoped this town would be a leader in embracing - such as the page 3 column written by Toronto Sun Columnist Warmington last year commending the town for embracing road hockey while Toronto try to ban it. I thought then they could see the value - not only as good thing for youths - but to grow into an attraction on a day in the middle of winter attracting business downtown. I guess they spoke too soon. Hopefully someone comes to their senses by March 17. Or perhaps try the Bollywood festival outside in March and see how many people it draws!

Thank goodness for our returning sponsors, some of who are right on Main St where we should be playing and who are still supporting through entry level sponsorships helping keep this worthy event alive, even though it is not actually right on Main now. And a big welcome to Newmarket Mitsubishi who know about community responsibility, as well as a good thing when they see it and without whose sponsorship this year we could not have had an event, especially with a last minute pull out of a cosponsor of the Mike Thornhill Memorial Education Award given to a youth player deemed a leader in the community... and having to explain to sponsors about the move. Game on!
Register here!