With summer in full swing and a heat wave gripping us like a cub to its mom, one doesn't have to be a rocket scientist to find things to do, especially outdoors, outside the usual 'Music in the Park' offerings..

Car Clubs for example are in full swing as shows spring up from Harveys restaurants, to malls, to Main St. Take a quick search and you can find any number of events and festivals going on, with all types of ridiculous reasons and names for them like the " Friendship Festival" from Niagara which also has a festival in the same area called the "Festival of Friends"...Huh?..Both sport free live outdoors bands, affordable accommodations, beer tents, and cool food, info / crafts booths, and a midway with rides for the kids, but they are apparently different festivals. Strange but cool.

Toronto of course has its smorgasbord of choices, but outside of a visit to the Metro Zoo again to see Pandas, there's nothing new that appeals to me there and the Caribean, Gay Pride or Afro-fests aren't my style either. Dragon boat races are cool, which you can find at Toronto's harbour front, but you can find that in Barrie or elsewhere too.

Last year I not only attended the Collingwood Elvis Festival but took part as a performer and in the competition. Unfortunately I was judged for the wrong category so my older style suits didn't match the concert days (jumpsuit) era they were looking for! But it was fun and they offered to pay my way and contest entry this year to make up for it which was nice of them. I declined with a polite,

"No thank-you, very much." This way I will always have that excuse as to why I never won the Best Elvis award! Ha!

Closer to home, with the July 1st celebrations in the rear view mirror the focus of the local media week after week after week (someone has money) has become about a " Hoe Down" which spends hundreds of thousands of donated dollars to put on a party, then dishes out the leftover spoils to a hand full of hand-picked minion charities and is then adored and fawned over by a community and embraced by local governments as proof of their do-gooding, and therefore justifying their ongoing support given them regardless of jobs going overseas. Yeehaw!

Then there is the Garlic Festival - ideal for a first date! - and Buskerfest in upcoming Newmarket with both the town of Newmarket and nearby Aurora hosting "Jazz" Festivals in August.

I'd post a link to Newmarket's Jazz Fest info however the town has a policy against blogs linking to their sites ( they sent me a letter saying so) therefore here's a link to Aurora's Jazz Festival info instead.

I put "jazz" in parenthesis because at first glance of the announced line-up for Newmarket's new festival - which are using the ousted former organizer of  Aurora's Jazz Festival - there doesn't seem to be many actual jazz bands. For example Glenn Marais is a great local talent and he's played a gig for me before, but they are not a jazz band. I grew up with Glenn and we didn't listen to jazz, believe me, we were classic rockers as was 90% of Aurora's teens - not country (sorry Hoe-downers) or jazz - but he is a great talent no doubt and I'm sure will rehearse some jazzy numbers for the event. Headliner George Olliver isn't a jazz band either, they are R&B. Soul as well, and yea he's played with The Who and Rolling Stones and they had some hits... in the 70's.. but not for jazz.

I covered them when no one showed to see them play at Graystones in Aurora, which was a shame because he's really talented, especially on keyboards. But it's psychedelic rock / r&b / soul however, not jazz, sorry...and on...so we'll see what this "music" fest becomes and whether it sticks to theme - which as a big theme guy I hope it does - as they sure seem to have a budget for advertising, with ads almost approaching Hoe-down numbers...Well, no, they don't have all the giant signs and lamp post banners...yet...having been running since early June.

I'm thinking perhaps they could have invested in more jazz bands instead of over hyping it so early on. That's just me.

Long run, I think some original thinking might do the trick..same old, same old, simply being redone, will always simply get compared to others' who have had more longevity, and are long established. So although starting an original event  - like a Beatle Main ia - may take guts, if done right will attract nevertheless and then its up to organizers to make it a success by giving people a reason to want to come back...and sticking to the theme!

..Build it and they will come!

Branding You! Marketing your project / self to the world 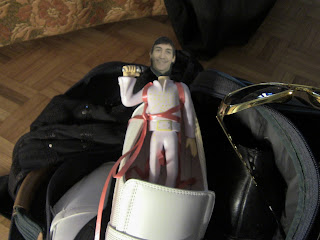 Through various means, such as Jazzled, a youth oriented social networking site I'm working on as a Project Manager when I can, and just online banter, I get quite a few inquiries from young musicians, singers, actors, even visual artists wondering how they can either break into "The Biz" or would like to take the branding of themselves or their band / idea to the next level.

Recently, one such example was a person looking to develop her idea for a t.v. and needed " a business plan Writer for a TV show" as he put it. Her wording told me she was likely green to
"The Biz", often a challenge, however I decided to take a look at it anyway. Ouch!@


I knew instantly upon glimpsing her attachments that this was much more involved than simply writing some plan if she truly wanted her idea to succeed, or at least have a shot at it, still I agreed to a fee for " Writing her business plan" all the while brainstorming on how to approach this. I wasn't about to just take her money and have her fail, so what I agreed to do was stay on the project until completion and act as adviser until then - in addition to agreeing to put together a production budget and marketing / distribution plan. To seal the deal, I revamped the marketing materials she sent me in minutes switching the format and lingo to read more in-line with the industry standards, although I still do need additional info to complete it. Below an excerpt.


Although the target market is a diverse, male and female audience between 26 and 40 years of age, anyone can benefit from the entertaining, informational stories "The Journey" reveals.

Part of today's plan for any marketable item - whether person, production or project, need also have an online footprint to increase the value to the search engines, and create awareness through "Online Branding".

The earlier you can an get entity set up online, whether through a blog, or website, or tweeting, or You tube etc - and they need all connect back to one another - the better, so when you launch you already have an internet search engine recognized product(ion), already serving those choosing to search the subject or company or entity to view it.

You can then tailor FAQ's or solicit feedback through your easy to set up blogs and other social networking sites like Face Book where you can also post links to your blog and open a related profile page.

This is all standard advice I give, and sometimes it takes sitting down with people and physically helping them set it up, but once in place they can pretty much self- manage it by adding updates on occasion which , again, lends more credibility to the computer search engines.

That being said, I  can only take them so far as in the end the talent has to be there or the ability to get the job done. An old boss of mine, David Borg, an Executive Producer of feature films such as Hansel and Gretel, who was very into motivational speakers and the like used to tell me,

" All you have to do is get them excited about it!"


"You've already qualified them that they can afford the investment, now they need an incentive to act.
All you have to do now is get them excited about it!"

And that, my friends, is the key.Now here's a really cool original graffiti  / artists and band...Enjoy!