It is with great sadness that I write this blog. The other day, Merlene Samuel-Cephas, died. I've known Merlene since my kids were, well kids, first meeting her when I approached her about teaching an acting class for tv and film which she thought was a great idea. I also taught production / lighting for theatre / film and myself and the kids and youths would create our own mini productions. She gave me a chance when seemingly no one else would and for that I am always grateful.

During that time, my mom would also come in with me on occasion after hours and assist me in making some set pieces for stage productions. Often we'd all sit around and chat as well as Merlene's mom Verna (who also left us way too soon of cancer), and I really admired the way everyone was treated like a family. Husband Jan would often roll in, kids in tow and help close up too. Of course, as the kids got old enough, they also joined their extended theatre 'family".

I taught there just out of film school, before digital editing and such was as accessible as it is today, so I'd crudely edit our productions on VHS tape and we'd watch the clips in the following class. The youths loved it and I'd always loved the idea of a youths film making club, so Merlene gave me a chance to do that. My own kids joined the "family" at that point and continued on after my one season teaching with Spotlight Theatre School, taking on a full time position in the city.

My son who'd never acted a day in his life and is terrified of people and crowds, played a lead role, "Daddy Warbucks", and was unbelievable. Only trust in Merlene and her staff could have done that
and I'm forever grateful. My daughter, who sings like an angel and is chock full of talent, learned a different lesson when passed over in the same production for the lead Annie. I think she was only 8 or 9, and I tried to explain that it was her first play and it didn't mean she wasn't good but she wasn't having it and quit. A year or so later she realized Merlene had been right and always wanted to go back but was embarrassed for quitting. I wish I'd done more to make it so; as it was an opportunity lost to have her surrounded by good people, and with no mom around, great role models like Merlene, and, increasingly, her former students who would often return after university to teach classes for her, so committed to her they were/are. And it was Merlene who talked me into playing a lead, "Gus Sharkey", in her 50's era musical for the first time ever, as we played to two sold out nights.

Merlene was already involved with poverty issues long before I was, offering out her community squads free for productions to low income communities. Many a year I had Spotlight performers visit York Region housing communities, who  also all took on her great attitude when they came, and in town for International Day for the Eradication of Poverty. I helped start Operation Sparrow , chairing the board for 4 years, and Merlene was the 1st to offer free spots to kids we would place. Just this summer someone called not able to afford theatre camps but with one call she was able to.

She never asked for anything and never said no.


But times were tough too, and Merlene silently struggled with holding on to the theatre / building -  the theatre named in honour of her father - time and again passed over for grants - first having to give up half the location and finally moving to another, losing the home base stage, lighting booth, and all the fixings they had there. This likely would have defeated most people, but when I ran into her again and found out what had happened, Merlene was completely upbeat about it, focusing on the positives - like less pressure to pay for a building full time wherein now they could rent locations for productions but hold rehearsals and classes in a smaller suitable locations. Later on I believe she created a new partnership for the school that still contained the word Spotlight, Arts Spotlight Theatre, still finding away to keep it going.

Recently, Merlene heard we'd been squeezed out of grant money to support our long running youth road hockey event which was free, gave out a cash scholarship, fed the kids for the day, and entertained them which Merlene's crews sometimes were asked to, as well as her feature former students come out to sing O Canada as well as for a Remembrance Day radio show, an Acapella young adults group she sent me who were sensational. Ironic now she's passed near that date.

When she heard about our dilemma with the road hockey event, Merlene offered to "piggy back' us on her grant through a 'fitness element" and adjust it to include us. The timing was wrong for it to work, but just the fact she would offer spoke volumes to me about the type of person she was. Rare is too common a word to describe her. It was at that time I think she had told me she had cancer and also told me she was very glad to have got to know me and that she really respected me. At the time I wasn't thinking cancer as in, "can kill you" cancer, and just blew it off as Merlene being nice as usual, but in reflection, she may have known that could be the last time she'd speak with me and she wanted to tell me. I bet she did that to a lot of  people she knows. Always thinking of others. 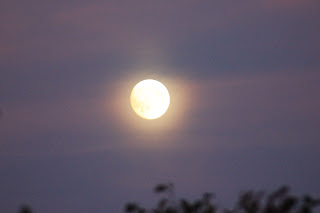 It was nice to be able to help Merlene for a  change when she approached me about a location for dinner theatre for her adult classes as I knew just the spot, having put on a number of shows there myself and knowing her needs, and knew it was a great fit, with good hearted owners that would work with them on costs...Again sold out shows for the two nights! I wish I'd gone now.

I can't imagine the pain her husband Jan and the kids are going through right now, but as I try and see through my tears as I write this, just know that you were all blessed to have had her in your lives as long as you did, and that she will always be with you everywhere you look in this community. Be strong and take the lessons she gave about selflessness and sacrifice and live your lives as if she's watching... because she is.

I'm sure you will also see an arts award created in Merlene's honour, because it's now on my radar, and, in her "living life", I don't feel Merlene got the true accolades and community recognition she deserved, always willing to let others get, and quietly accept being passed over because others were deserving...Well no one is more deserving Merlene. No one. Rest in Peace.

A family fund for the family has been set up at this link for donations.
Email ThisBlogThis!Share to TwitterShare to FacebookShare to Pinterest
categories Acting, Arts Schools, Children, Dinner Theatre, Teacher, Theatre School, Town of Newmarket
Newer Post Older Post Home