The life of a promoter or show event coordinator or record label evolves constantly, and a real promoter is always looking to do something bigger, and so when a good promoter is filling their venues to capacity with patrons, the natural progression is to find something bigger to put them into. That's the predicament event and music promoters / record label Arthur Jr Music, led by Arthur Weeks aka talented Hip Hop singer Maurice Weeks, along with partner / compatriot Dan Barker of 90 Nickel Entertainment, is experiencing right now. But these are growing pains of the excellent kind. 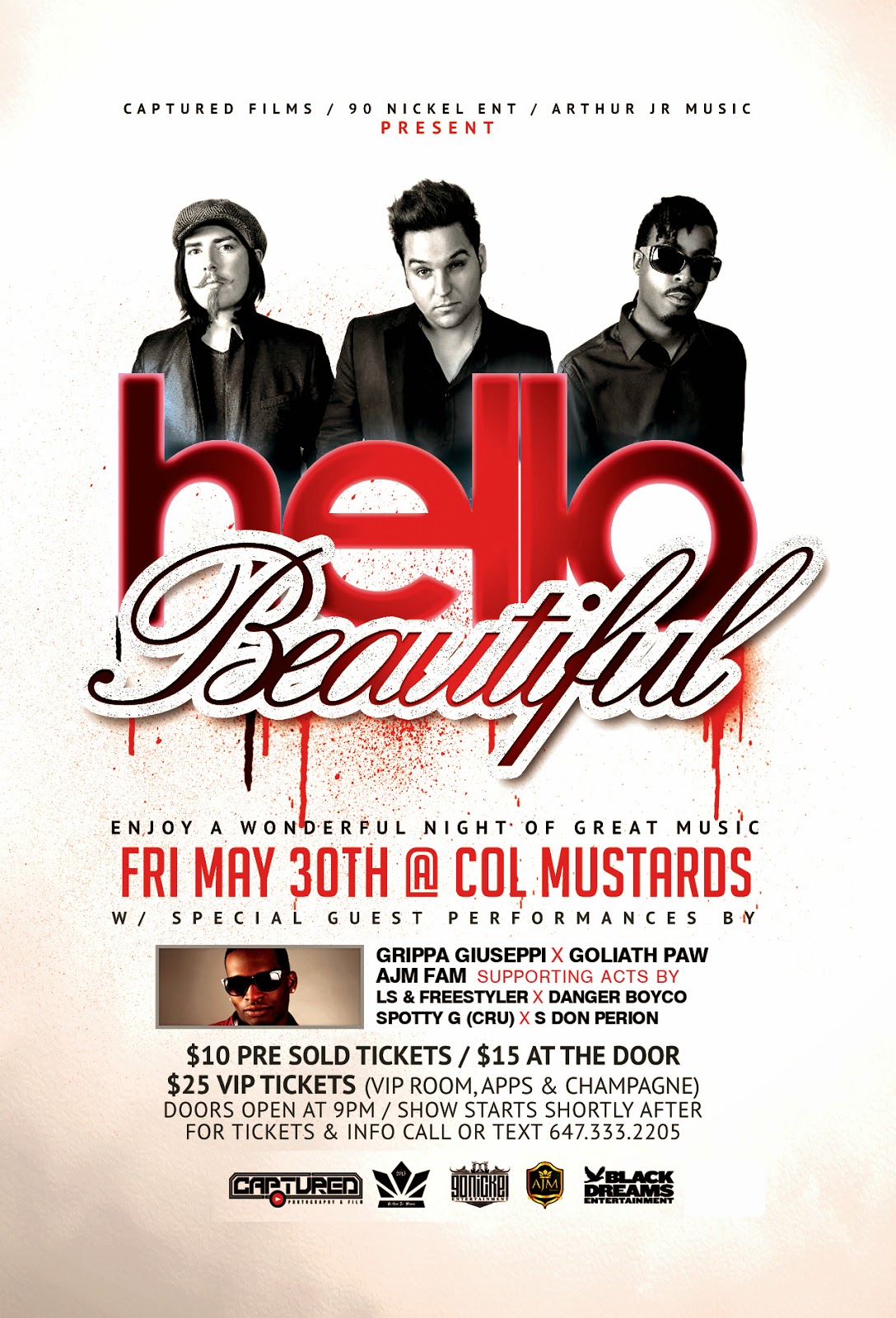 Let's face it, the ultimate for someone inclined to put live rock & roll, hip hop and other cool genre laiden shows together is to do bigger and better each time. Just look at the progression of rock concerts over the years. I actually had the honour recently of interviewing Johnny Brower, one of the guys who organized and promoted the first ever multi day concerts who happens also to be the same fellow who organized The Toronto Rock & Roll Revival concert of 1969 - the first ever concert John Lennon performed apart from the Beatles, and widely believed by those in the know as being the catalyst that broke them up. Hey, what can I say, that's who I hang with when they are producing the Pop69 movie about him. Ha. The irony of having driven around with the legendary icon a few months back and now being out with an eager group of young up and comer wannabe legends didn't escape me.

I tried to mention it to the three who'd accompanied me on the little road trip, including another indy records and entertainment Producer Carly Myers of ILLBROKEN (IB) Entertainment, while showing a potential site for an indoor / outdoor gig that holds up to 1000 people, but I think it was maybe too much at the time to take in as they were way loving the venue and already wondering aloud about the how to's and what if's. 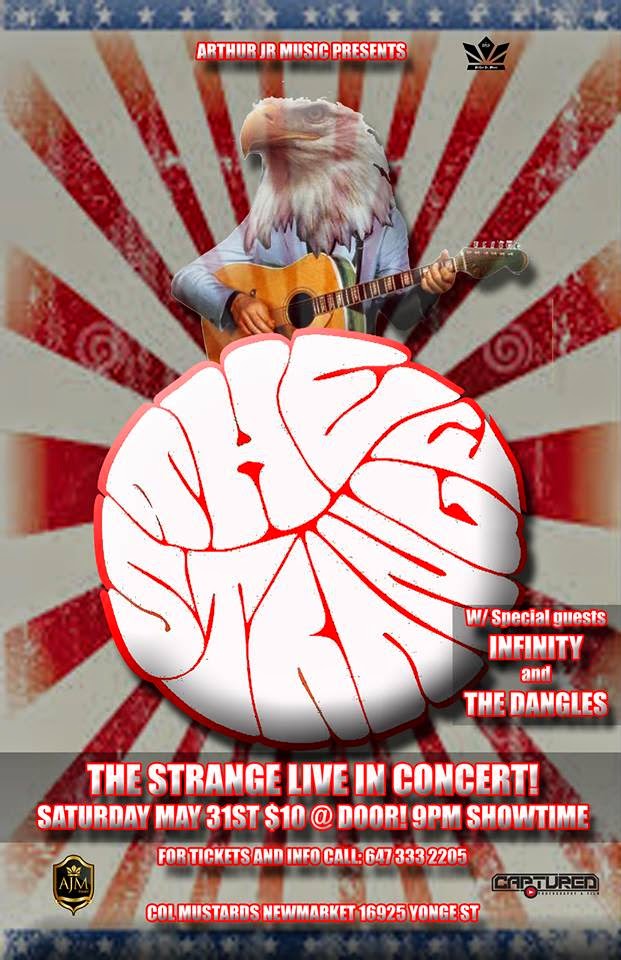 Anyway, the 1st idea was to bring some kind of headliner in to cap off a day of bands including showcasing local bands who have stood out in band wars and Talent Search competitions. So it would showcase not only a top notch headlining act, but some very cool other bands as well.

TPE could perhaps hook in some great food from a couple of local businesses and a beer tent to seal the deal, and the event would have all the fixings of a fun time. TPE's been looking for someone that fits this bill for these types of venues to work on the entertainment side and believe these guys fit that bill way well. They also combine to have a tremendous following and combine that with the fact they have also brought some great new talent to the stage in Newmarket, Richmond Hill, Aurora and Markham too and are always looking to develop talent and introduce the coolest in music trends through their events, which I'm digging, and you get a recipe for a great time. 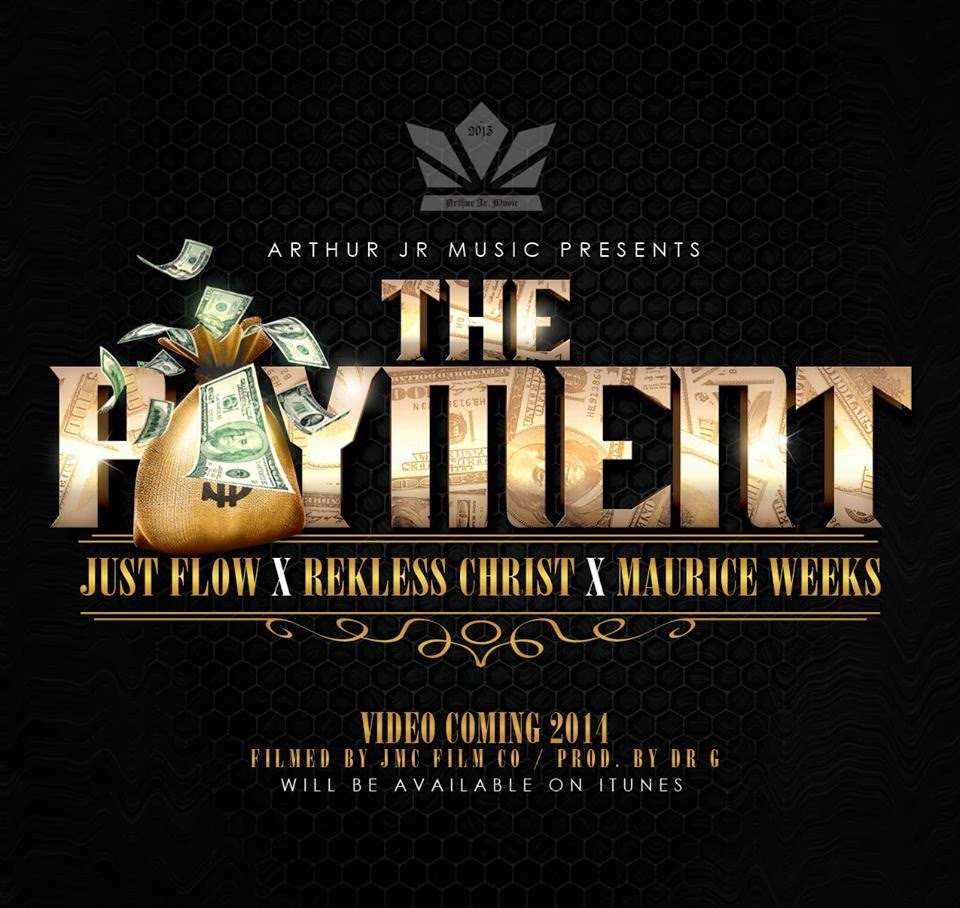 Maurice tells me they just signed an exciting rapper artist to the label  also known to do little genre blending which is cool and maybe what the music festival will be come about.. a festival of merging rock, rap and hip hop styles..thrown in amongst some traditional styles - A celebration of Rock Music history if you will!...So stay tuned for sum of dat shit y'mean!? It's all rock & roll to me.Ha.

These guys are at the ground level forefront of the music scene today - just like Johnny Brower was in his and am excited to see this show to completion and what kind of talent line up these guys put together should so stay tuned! 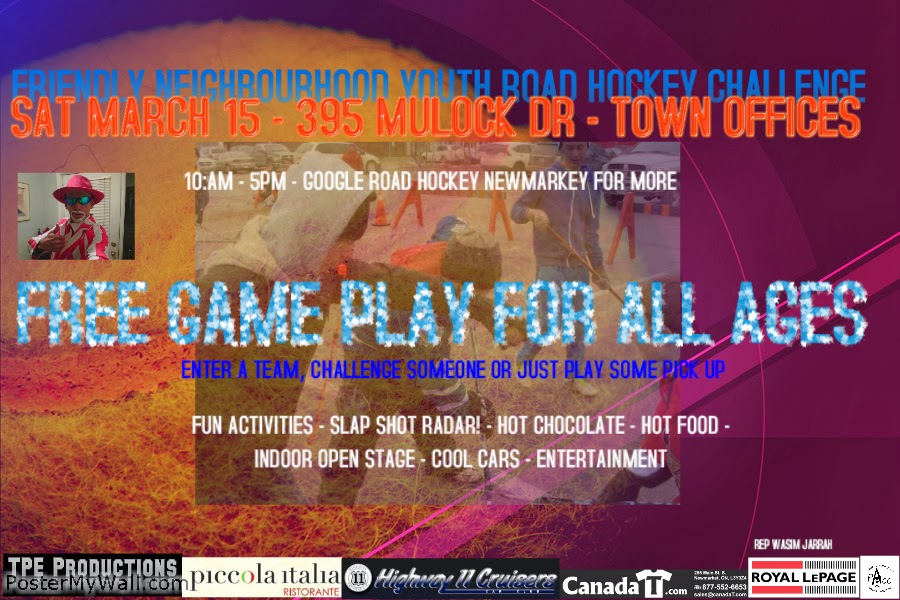 Maybe I should have been a juggler. It's entertaining, and seems I do that with most everything in life anyway so why not? Right now I'm juggling whether to make posters for the road hockey event so I can print them and get them out tomorrow, or to work on special table talker menus and invites for the Mar 26 Grand Opening of Col Mustards' Ladies Night entitled, Girls GoGo Wild Wednesdays? Hey, how else can you dress up a Wed night!? Ha. Anyway on top of that, there are the logistics of the budget or lack there of for the costs of the youth event, and tying up little things like press releases and vendors, and oh yea a little matter of having players for the event that until recently had no location to call home for 2104.

It's a long story why the Annual Friendly Youth Road hockey Tourney has had a tough go this year, but come hell or high water there will be game play! Ha. The emphasis for tyhis event in the past has always been participation and not compettition and will continuue to be so for 2104 whith the emphasis on getting the whole family out to play. Game play goes  Sat March 15 10:30 am - 5 pm. Pre register team or on site.

NEW LOCATION: There will be some friendly "tourney" play at the new 395 Mulock Dr ( Town of Newmarket offices) location but there will also be ample opportunities for anyone - including mom and or Dad  to play a bit of road hockey and maybe have some hot chocolate and hot vittles with Newmarket's Piccola Italia providing the food services. Bring a stick if you can or one will be lent. 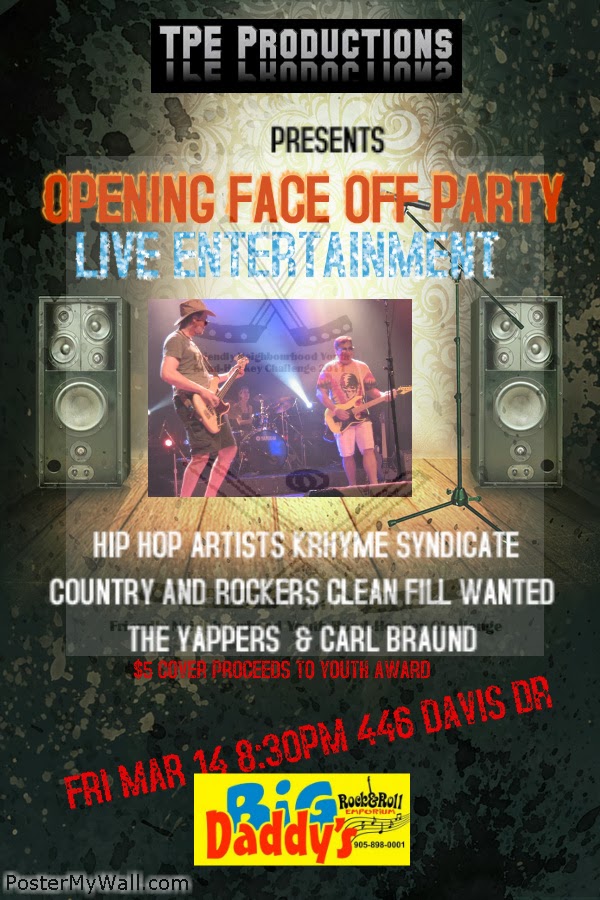 LOCATION: The Night before, Fri Mar 14 at 8:30 pm, there is also an Opening Face Off Party at Big Daddy's 446 Davis Dr Newmarket, held as a FUND RAISER for the FNY Road Hockey Challenge Youth Award - the Mike Thornhill Friendship Award - given a youth showing leadership in the community. The Opening Face off party is a licensed party, traditionally mostly for the adults, like organizers, volunteers, and members of the public featuring live entertainment, including for 2014, Vocalist Keyboard Whiz - formerly of the band North of 7 - Carl Braund, as well as Psychedelic Country Rockers Clean Fill Wanted, Reggae Country-Rock sensations The Yappers, and Hip Hoppers end the night off hosted by the way cool Krhyme Syndicate.Tickets only $5 at the door.

The next TPE DryDance Production is also upcoming Sat Mar 29 for which I've yet to think of the monthly events theme let alone make a poster!

Meantime, I'm also juggling whether to pursue some blog activities for other business types and services whilst maintaining a pulse on my daughter's schooling / needs - having a tumor in her leg, painful, and unable to be removed. Makes one understand that as long as we have our health we may be okay, but one never knows. So, meantime, juggling it shall be, until the pins begin to drop! Gulp! Then I'll be in trouble. 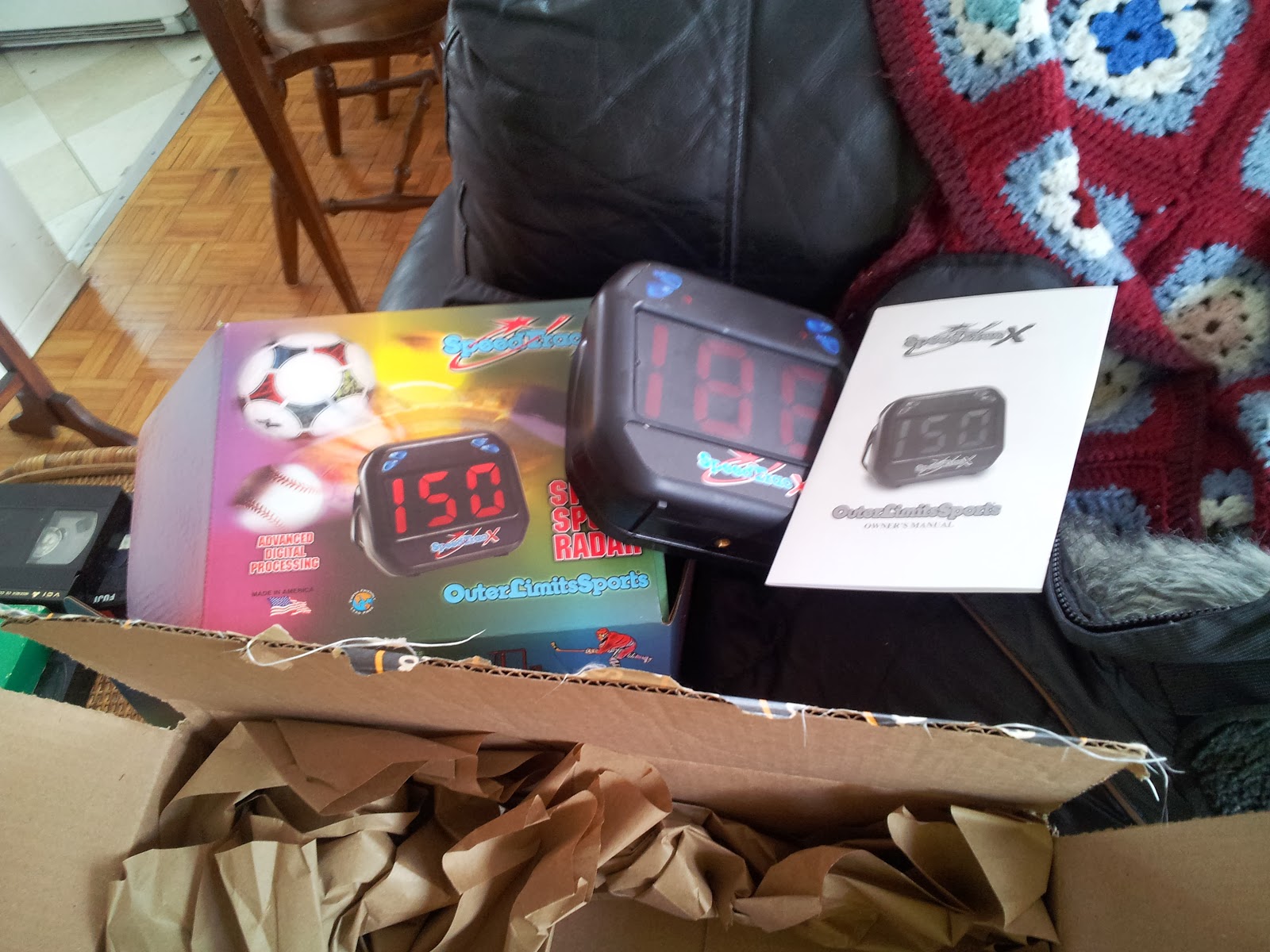 The doorbell just rang and the slapshot radar equipment is here! Now this will be a fun activity! Ha, maybe I'll bring it out to both events as a funds raiser tool! See you on the streets! Until Next Time!