Building towards two events at once can be a bit of a juggling act, especially if you are by nature a bit of a perfectionist. Right now among some projects, we are a little behind in launching our "screener" for a documentary for which I hate missing deadlines, even if they are my own self imposed ones. I'm behind because I put off firming up the host band for our "Open Stage" portion of Rockin' Deli Night which concludes with a DJ and the latest in dance. But I'd had some discussions with Newmarket 's THE JAMSPOT owner and operator Max -  and wanting to keep things local as I know there is a ton of talent here - had confidence Max would turn me on to the right hosts given time. Gulp..but I was running out!

Max is a consummate pro too, not wanting to recommend just anyone, and taking the time to understand what I was looking for. But I think he also realizes that we can work together here and create a cooperative  atmosphere with enough rooms for everyone to play in whether they are jamming or putting on live shows. THE JAMSPOT can also hold smaller shows as well and is ideal for CD Release parties too, but THE JAMSPOT's  big feature is the custom built sound proofing built in. Bands love it for good reason. And they are going to love playing at Deli house Caterings Rockin' Deli Night location at 1220 Stellar Dr in Newmarket as well, as it renowned for its good sound as it's original build use was for a concert hall for big name acts way back in the 50's and 60's. Later on it was also a succession of night clubs including " Club Spotlight" which featured the latest in lights and booming city-like sound for the time. Rockin' Deli Night takes a walk back into that era and even offers prime rib as dinner - optional of course!

Funny story. I was writing a column, " At The Clubs", for CoverStory Newspaper in York Region back in the day and one night while covering a band at none other than the Rockin' Deli located on Yonge St in Newmarket, I was attacked by about 4 or 5 guys outside. They jumped me in the parking lot for, as far as I could tell, wearing leather pants! That's just a theory mind you as I was new to living here then having spent the previous 10 years or so living in cities, so pleated leather pants may not have resonated with some locals - a fact that was pointed out to me by none other than a local! ha! I'd never have thunk it. I still have the pants somewhere, scrapes and all! Ha! Anyway these guys were so drunk they couldn't sustain any damage, as whenever they went to kick me I'd roll their friend who was now lying on the ground with me (from tackling me) in front of the kick! Ha..I got hit a few times though and the doorman watched the whole thing from inside not bothering to do or say anything. Afterwards they let me in to recoup and several years later I dated the bartender who had been working that night as she remembered the incident when I relayed it to her...I should have known better when she did nothing as these guys attacked me that night, that she'd be, er ah ...interesting. She went on to have a Glass Tiger member's kid..oh well..that one's another story for another day. Ha! Now who I should have gone after was my flaxen haired co-worker Mcgurksky or something like that who had showed sympathy for me and who also was a single parent at the time like me. Her and two other girls were like the Charlies Angels sales force on the CoverStory YR team, and likely sold the jaw-dropping men ads before uttering a word. Mgoo was beautiful and hard working, but one of those women who leave you tongue tied whenever you tried to say anything to her, let alone make a play. Man, what an idiot I was. Why did I pick her to be the "nice guy" to! Ha!

At any rate Max came through with some outstanding musicians to host the first Rockin' Deli Night on Sat Feb 25 called Sean Bourke Band! The trio's members have played with a number of bands over the years - some having played alongside The Good brothers or The Goods as once known - ironically through a time period when I interviewed the band for a TV show I produced and Co-hosted called "Out and About" - and Teenage Head to name a couple so the array of tunes they can play will be phenomenal, and any vocalists or accompanying "Jammers" can get in on the action! Everyone knows I like a good show and this one is a shaping up! 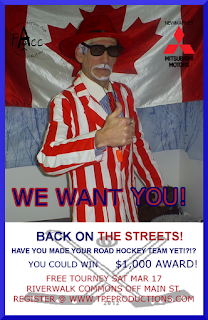 Speaking of shaping up, the 8th Annual Friendly Neighbourhood Youth Road Hockey Challenge is shaping up with the new addition of Newmarket Mitsubishi as tournament sponsor! The now longest running street hockey tournament in Ontario features live entertainment, music, comedy play-by-play with TP's own "Gripes" as featured in the poster campaign.

WE WANT YOU! BACK ON THE STREETS!

And uses a Don Cherryesque character dressed in Canadian red and white stripes and mirrors the US army recruitment poster for "Uncle Sam".

The 2012 event will be held again in the downtown Newmarket area including spots around the Newmarket Community Centre and the new Riverwalk Commons. With public skating already an attraction there we expect the road hockey activities to take off in a big way for 2012 and plan to utilize the outdoor stage for live entertainment for a "halftime show' and for the end of the event shows, including a variety of talent. We may maintain an open stage during the event combined with our canned music, but either way it'll be a fun event!
This year youths can sign up for the free event online as well in advance @ www.tpeproductions.com

Pick up games and an Opening Face-off Party for us Oldtimers too T.B.A.! 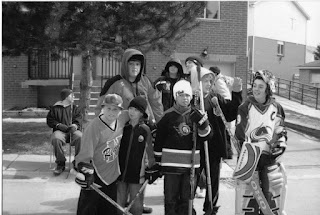 
Promotion and branding of course go hand in hand and sometimes you can add sales to that mix when all three merge at times such as the case when I attended a 'Bridal Show" recently representing Deli House Catering's interests. I like to think I know a little about branding having worked on projects as an Associate Producer with a Co-Executive Producer named Lou Pearlman (Supercross The Movie, Timothy Dolan's scripted Red Riding Hood musical version) who wrote " Bands, Brands and Billions and is considered the inventor of "Boy Bands". Of course that was all before he was jailed for tax evasion or something!

Deli House Catering's Rockin Deli Nights starts Feb 25! See link provided for details!
The Timpano formals run wedding show was held at the beautiful Roman Palace banquet hall in Newmarket and featured the usual gamut of caterers, decorators, cake makers, photographers and the like but this one also had a couple questionable booths such as an exercise machine booth??? It seems insurance companies have also managed to squeeze into the mix somehow. The only other experience I've had at wedding shows really - other than perhaps when I got married (& later divorced) so many years ago it seems...sigh..was putting together a same sex wedding show which is a whole blog in itself!

Anyway my bridal show partner Nick and I managed to get set up in anticipation of the rush that never really materialized and ended up instead chatting a fair bit with the other neighbouring businesses mostly and giving out free food samples to anyone who did happen our way.
I mozied on down at one point to see what the "other Nick" had going on food-wise, as in Nick Co-owner Chef of the Roman Palace banquet hall as many moons ago I used to do gigs for his father and Nick Sabino was the DJ...now he's the Chef and I must admit his pasta dish was pretty good. Zesty sauce..noodles el dente. the old man must have taught him a few secrets before he was so cruelly taken away from this life by a drunk driver some years back.I hadn't seen Nick or his sister in a few years so it was good to see them again.Salute.

I also ran into lovely Rita a long time Newmarket area resident and business owner and friends with a buddy of mine who isn't speaking with me right now.. for why I know not ha..but Rita's a Decorator and Events Planner with Abovo and we happened to need one for a Deli House event so we connected at least and maybe they can each help each other out.I also connected with Russo Photography for some possible video work..but where were the brides!? So a tad networking went on.

In the interim I got into a bit of a "discussion" with the lady from Wayne Jones DJ services, as I told her I thought that Jack & Jills were something that women invented to eliminate the stag (they also specialized in Jack & Jill packages). I told her stags originally were money makers for the couple not Jack & Jills as there was no such thing, while she insisted that stags were only for "strippers etc. I repeated that they outdated the creation of Jack & Jills and were always as money makers for the man... then pulled out quietly and left. Ha!

Anyway the show itself as a marketing tool was a disappointment as the turnout was low, although the fashion show was well done it seemed. At one point I heard this song with lyrics like, " I'm sexy,  whose sexy, I'm sexy etc and turned around expecting women - but it was the guys! Ha! Egads!

After we did our thing and handled the half dozen perhaps real prospects that came our way, the candy lady behind me from Old Time Confections ( they provided mints and candies located in Georgian Mall Barrie) mentioned perhaps I should ask about a list of all the attendees which is standard procedure I'm told at most of these, and so I did, but was told they didn't do that for their shows. He went on to explain that they would be sending all attendees an email on our behalf etc and I stopped him and said,

'You know I did a google search of this show and it didn't even come up, but Barrie's Timpano show did."

He said it would take awhile that they  had not been in Newmarket for some time but would again catch on in time...blah blah blah...

In time? Whose money is he spending whilst he waits? Get an SEO on it buddy so the show comes up immediately! It doesn't take time it takes a little effort, and yes spending a few bucks! That's why all these people paid for booths for your show!