Born To Be Blue & Regression to hit screens 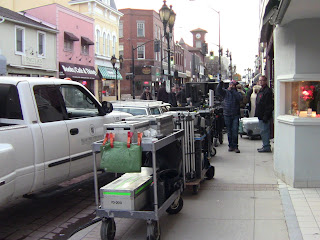 Born to be Blue is a feature film bio pic coming out in theatres this week that tells the story of a jazz legend, Chet Baker, during a certain period of his life in his forties. The lead role, played by Ethan Hawke, nearly never came to be, yet seemed destined to always. Explanation....

The only reason Hawke took / was offered the role is because it was convenient for Director Robert Budreau to drop off a copy of the script at the hotel to read while he was staying in Toronto filming the Alejandro Amenabar horror film, Regression, in Newmarket, Ontario which open in theatres next month as well, and then pop by on occasion to meet at the bar and discuss his vision on the role / movie while Hawke was missing his family, and between being on set. Geez Canada has paid off well for this Ethan Hawke lad. 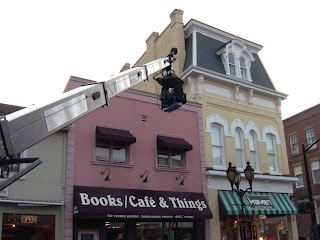 The ironic part, and reason for my earlier, "yet seemed destined to always", statement refers to the fact that earlier in his career Hawke had been involved in his own production for a Chet Baker film with Richard Licklater but the film about the legend jazz/blues player, which took place at another time period in the performers life, never got off the ground. So this role has actually been 12 years in the making for him.

Well you never know, maybe York Region will prove yet another set location for the next music legend bio-pic or Tommy Boy scene, what with Newmarket becoming Main Street USA of late, and even the winter blues can be dispelled at Aurora's Winter Blues Festival this weekend!

Down East Charm @ The Sociable Pub

I first caught inklings that the Sociable Pub could be some good when I read a few positive postings online about them. Through research, I discovered the "he" of the husband / wife owner duo, Lenny Ochiogrosso, had been the long time (over 20 years) manager of Archibald's Pub in Richmond Hill before coming out of "retirement" and taking on the Sociable Pub in Newmarket, Ontario, Canada, along with his Darmouth, Nova Scotia born wife, Lynne Ochiogrosso-Gallant .  Experience and a natural at hospitality, "Lord tunderin' by, this may just work" was my first thought. 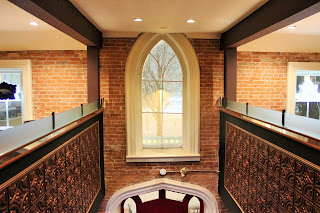 This particular location itself has a long local history as firstly a protected heritage building, and secondary for businesses, so any proprietor must respect the heritage conservation regarding any construction or structural changes made and all changes need approval. Operators have had to make work the existing design with minimal changes over the years, since first refurbished, which all adds character in the end. The result is a beautifully kept, old,  estate home, set up to be a functional business. It just needed the right keepers. 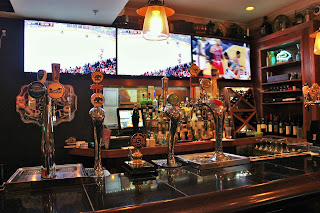 The first to open in the location after it was restored in the 90's was as a "Just Deserts" franchise. I recall reviewing them on our local Rogers TV show, "Out & About" , I once Co-Produced and Co-Hosted featuring the local dining and entertainment scene. They had had such beautiful wood beams with gorgeous hardwood flooring then, not as shiny today perhaps, but still very much the same two-level design and charm. The upstairs now is mostly for larger groups I believe, and down features a bar and more seating with live ambiance performers on the weekends all wrapped in a down east cuisine that includes lobster rolls and P.E.I. mussels. My recent stop there left me drooling for more, but I'll get back to that...and the seafood! 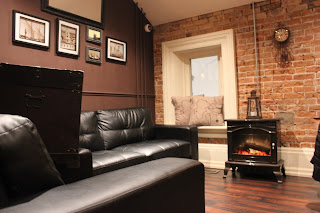 Just Deserts did not last, in fact around that same time a girl named Vivi Lemonis was shot accidentally while eating at a Toronto Just Deserts location, killing the brand as well at the time - although that certainly wasn't the only reason they didn't survive as the location was always too big for...well... just deserts! Even after their departure, a number of entities have tried their hat over the years with no one really managing to have it running as it should be - functional and successful. Most struggled such as in more recent years Big Chris BBQ and before that Orleans. Orleans came closest but never seemed to master the hospitality side and seemed bent on in-your-face bands, too often, too loud for the location.

The Centre of the Universe 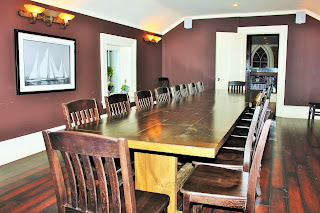 Problem also is / was the trend of late that some clubs and restaurants - many in the area - follow is this process where they have few regular clients, but instead rely on the acts bringing all the patrons in on their designated nights as the place's main / only crowd. It always has to be a collaborative effort between artists and owners / managers / staff to maximize attendance but far too often now a days the onus would be on the entertainment alone, with no effort to build their own regular clientele or do much in or out house advertising - like we did in the old days. 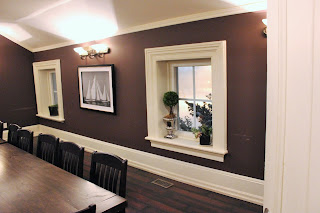 I recall walking into Orleans at times during non-band hours and it was like a morgue. No house music - live or canned - no people, no greeters during open hours, just no atmosphere or warmth. And then consistency - one week entertainment the next not - or the same rotation of bands alongside unspectacular, inconsistent food. And it just didn't feel welcoming.

It's best to check out a place without them knowing when you plan a review or blog to really get a taste of how a real patron would feel, so I arrived with no reservation to an almost full restaurant - save one reserved four-top and a couple spots on the bar which I really didn't feel like doing. As I stood puzzling my choices, I was immediately greeted and given my options - bar and eat, or wait for an opening, or if perhaps the now late reservation doesn't show I could wait and see about that. Finally, after standing in idle while watching steaming dishes of food like their garlic shrimps, looking a nice count size and screaming out my name, I chose sitting at the bar, half expecting to get sloughed off but still hopeful. Although dressed with a suit and tie, I was  comfy with the casual dressy style most patrons seemed to be wearing. 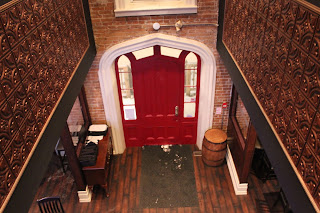 Shortly thereafter I was approached about a beverage and I asked about a Rickards on tap ( Hey man, I'm out of touch on beer ok!) which they did not have but the attentive barkeep knew a similar on-tap alternative which was actually quite suitable. The waitress could see me as she punched orders in, my corner bar seat overlooking her terminal, my face conveying complete patience and understanding and lo and behold shortly into my beer I guess they gave her the okay to give me that table which just happened to be right beside the solo performer entertainer and it could not have been a better spot. No wonder they had reserved it. Cool. Their loss, my gain!


I'd pretty much assumed correctly, that the hands-on owner was that knowledgeable friendly barkeep, and later was informed that his wife and partner was also working the floor. In other words, these are two hands-on owners who have obviously taught their staff about the most important element in the industry, hospitality! Seems a simple thing I know, but so often it is the missing critical element from staff, particularly in Newmarket I've observed over the years, who have either simply not been trained to do it always, or just don't care to. "What can I get ya?" just doesn't cut it. I suspect with this couple it comes naturally, with the fairer half hailing from Canada's east coast originally where they are renowned world-wide for their hospitable nature...and delectable seafood dishes! 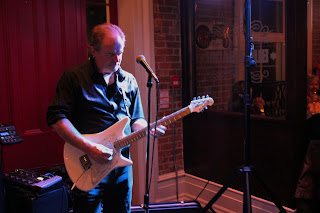 Shortly thereafter, as the evening's live ambient Singer / guitarist, entertainer, Bill Nadeau, began performing his first numbers, some cool jazzy and bluesy instrumentals, as my waitress who was holding up great even though my experience could see a little of that "deer in the headlights look" with a full and busy restaurant, took my order -  I'd chosen PEI mussels, knowing the Down Home style theme of the restaurant....and they didn't disappoint. Plump, tender, plucked easily - like snapping daisy heads - from the wide open shells, the now separated mussels, left swimming in a white broth infused with fresh herbs and served with TSB's unique garlic toast, while my discarded shells filled its accompanying extra bowl brought for just that! If I could change anything it would be that I'd personally prefer just plain crusty fresh bread to soak up the delicious broth unimpeded by the crispy garlic toast flavours and worth absorbing all on their own.

It was Some good Mmmmmmmmaritime! 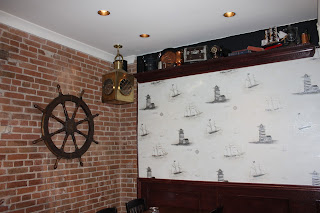 A woman from a larger birthday party at the tables next, approached me about my extra chairs at some point, easily able to still chat, with the guitar player pouring out some Peter Gabriel, Elton John and David Wilcox among tunage. This is why I call it live ambiance, because it's there, but not overpowering - something that experience, from years in the business with Archibald's in Richmond Hill, brings.

With the Sociable Pub, I see a smart, live light entertainment setup that's affordable for the house - with often a solo performer. Duos and Trios would probably work nicely as well but the performers aren't necessarily the evening's main focus, although enjoyed immensely and an integral part of the experience, but it's the hospitality and the food that are the stars.
And that is the key.

I must say it is an absolute pleasure to know that the new operators at now The Sociable Pub, Lenny Ochiogrosso and wife Lynne Gallant bring great down home hospitality, food and experience to the location. They understand the simple formula for success, I feel, and for that reason can likely remain as hosts of that historic location for as long as they wish.

As Lenny informed me, " We hoped to open a place for a certain older age group, so they wouldn't have to leave town to enjoy a night out. A place we'd like to go to"

That my friends is as close to my philosophy on hospitality as I've heard in some time. 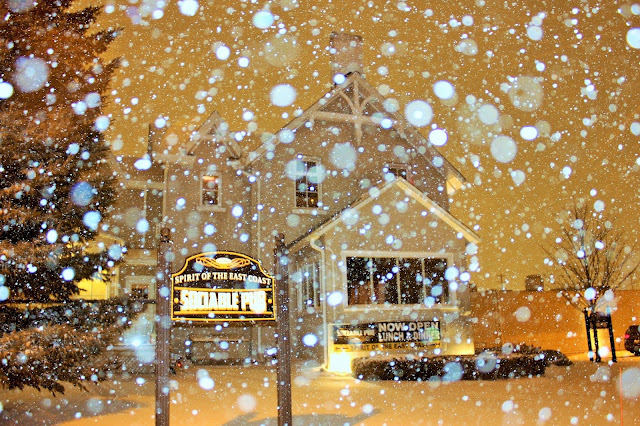 Sitting at my perch, I could easily observe how the staff were handling the overflow, always seemingly able to greet before an exasperated, confused, "what next?" expression could envelope them. I look forward to a more detailed in-depth taste and Tom's Top 10 review of The Sociable Pub whose menu is unique, not too complex - from Scot-Irish traditional stews to Nova Scotia Lobster / Seafood, to P.E.I. delectables...Delicious and down-home sounding!

Next on my wish-taste-list will be their crab rolls followed closely by the crab fritters!