Effective marketing is essential no matter what "product", service, or event you are promoting and to that end I commend an enterprising person who used her "status" as a single mom in a Kijiji ad soliciting for work as a part-time house cleaner. I could identify with her plea as it reminded me of some of what I'd gone through in the past as a single parent. Most importantly, from a marketing stand point, it moved me to action as I'd been thinking about getting a little help in that department as, let's just say, I'd never impress Molly Maid.

When I first got custody of my kids I'd been working in T.V. projects onscreen such as in Forever Knight, Top Cops, Secret Agent, The Steven Truscott Trial ( M.O.W.) and others on which the set hours were often all night long, and I supplanted this with income as a bartender at the now defunct Glenway Country Club where I'd meet the Publishers of CoverStory Newspaper York Region who'd recruit me to write a column bi-monthly, "At The Clubs" and "Local Flavour" as Entertainment Editor while at the same time I was producing / hosting a cable TV show that covered most everything I wrote about. Part of the deal was I got to run an ad as well continually, and so started Tom's Temps cartoon ads I drew which would much later evolve into TP Entertainment & Media Productions.

It was a wonderful time period in my life until reality set in - which was I couldn't do it all.

Admittedly my work deteriorated at CoverStory as my "At The Clubs" Columns became less and less about the bands and such and more creative writing since it was hard to get babysitters enough to get out and about and attend all the shows and grand openings etc that go with the territory. And you want to be able to do a good job too as the bar owners had liked the coverage of their venues and pics I'd take to post in the column and I really enjoyed doing it. But my kids came first now.

Slowly my "Local Flavor" column also became diluted, with me covering now mostly family friendly restaurants and I'd write more about portion sizes and the number of available high chairs. Yea, riveting stuff. Not that the bosses noticed all they looked at was if the clubs and restaurants bought ads on the page.

I pissed a few owners off here and there too, like Larry from Fitzy's in Newmarket (still owes me $800 but that for another day), as I wrote that if I hadn't gotten in for free I wasn't sure I'd have paid his cover charge to see (use?) sumo wresting (suits) which he didn't like, but mostly I'd flatter and highlight what was good about the places in question.

One night I was attacked outside a nightclub by 4 drunk patrons unknown to me and not too long after that I realized something had to give job-wise as getting daycare / babysitting had also become a constant nightmare of uncertainty. I realized then I needed to find a 9-5 job in order to manage the kids and landed a General Manager's position with a brand new restaurant in town, Muskoka Moe's, which essentially for the most part would enable me to be a 9 to fiver and have regular daycare for my kids and give 100% to the job. It was a good fit - not the ideal choice for what I wanted to be doing but it's what you do when you have kids alone - you make compromises.

And we all lived happily ever after. Wrong! Ha. 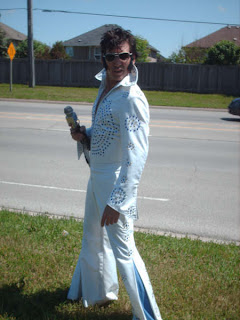 My luck kicked in as usual when a 6 months into the gig which I was warming up to - having kicked it off as "Elvis" via limo entrance to the Great York Region Restaurant Race for which I was an original committee member of (raised $100,000) - the guy who hired me sold his half of the business to a couple who  first moved me to the night manager position - a nightmare with kids - and later informed me they wouldn't be needing me to manage anymore when I showed up with my kids a couple times while I waited for the babysitter to pick them up.

Panic mode set in then..


At first I'd gotten us a two bedroom apartment to live in, which was fine, even though my room was the closet with a mattress on the floor but eventually I moved us and managed rooms for everyone by renting one out and adding 'some babysitting" as part of the deal, whilst I eventually returned to ( film and television production) school figuring I'd come out skilled enough to find my way. I was also a principal performer / and original Producer and co-creator of the Canadian Improv Showcase for both Cable T.V. and live shows including producing and booking the shows as I attended school. By then I'd ( had to) taken my car off the road and had to get the kids to daycare by foot, then take transit from Newmarket to Dundas St East in Toronto - about a 2 and half hour treck most days. The kids never knew any  different though and loved going to our improv shows and rehearsals and so that took care of babysitting for those gigs.

Upon graduating with an 89% average and with my script a comedy about 3 homeless guys - one of three chosen to be made into a film by the school - I fully expected the pick of the litter in jobs out there when done, but no, the industry expected you to volunteer to gain certain experience. Luckily I'd already produced, hosted, camera operated, and performed on TV so at least I had that.

My first job post graduation, outside independent movies I participated in, was the most popular T.V. show on the Women's Television Network, The Designing Challenge as a Production Assistant and Camera Assist which was fun while it ran, but once the season was shot it was done for the year. I also had continued to Produce C.I.S. at that time as well and tend bar when I could to get by, but it still wasn't raising enough income. What I needed was a job in the industry I was schooled for with regular hours that gave me a respectable position at a pay scale rate that allowed me to take care of my family / costs and had opportunities to advance - but I knew this was a tall order. Finally it got to the point where I wasn't sure we'd make it and on the verge of possibly even a break-down, wondering what I was going to do.

One night I found myself alone in my garage, my kids in bed. I remember speaking aloud to no one in particular my feelings of frustration, maybe even shed some tears, okay so I did, quietly so the kids wouldn't hear me. Then I started smashing boxes, tables,  old hockey sticks and anything else without value stored in the garage ending with a plea to "God" that should he/she exist I needed help right now and it had to have these same conditions  I've described above. "In return", I said aloud quietly that " I'd continue down the path to assist youth ( I'd already sat on a committee that erected towns first youth centre and created "youth beat" in CoverStory newspaper ) and go over and above what I'd done previously should I be granted this one thing. I'd never done this before."

Now I'm no bible thumper, but I will say this only, within two weeks of this prayer/promise I found a position as an Associate Producer of feature family films and would participate in movie productions that included actors like Betty White, Wayne Rogers, Rue Mcclanahan, Kate Jackson, Judd Hirsch, Howie Mandell, Taylor Mummsen, Ted Shackleford, Stacy Keach and Josh Hutcherson among some.

Working out of Toronto as a satellite company for another in L.A., I learned from a very successful Executive Producer of films, David Borg, who'd returned to work to Canada after some years based in Los Angeles, working closely with him and he encouraged me to hang and listen to him pitch which I often did. Borg allowed me to show up at 9 am and even 9:30 until I got a car again and was cognizant of the fact I had kids alone, and I never forgot that. This all being said this was no creative position as The Associate Producer's job in U.S. style movie development is essentially a sales job - you're selling a limited partnership in a movie to an investor - and my job was to cold call potential investors at their places of work and once I qualified someone as an investor, hand it over to Dave to close the deal. Dave taught us how to handle and qualify potential investors before he'd even take a call, and when he did he was natural and direct and could almost identify immediately whether they were real or a 'stoker".

I always sat in wonder as he'd walk someone through the partnership agreement paperwork over the phone, someone we'd never met, yet someone investing a minimum of $25,000 dollars up to $100,000 to step on board. He taught me that you were looking for a certain type of guy - someone who can get excited about getting involved in a movie, perhaps attend some soirees or come to L.A. for the movie launch at the Kodak Center. Someone who could also easily be able to lose the entire investment without it killing them financially. It offered also diversity to one's portfolio as it is good to have investments diversified especially through times of world strife. He taught me how to "control' the call. Dave even dared us to put people on hold for no reason.

" If they are a real investor they'll wait for you" he'd say.


His skill level was unbelievable and the environment intoxicating at times when you'd sometimes hear numerous pitches at once like a high stakes investments house and the energy levels buzzed in the room especially when someone had someone really interested. Dave encouraged us to stand up when speaking to keep our energy levels up and taught us closing techniques only years of experience and hours of motivational info could offer. The psychology of it all astounded me.


Within two months Dave had moved me up to closer in a commission only role and I became top producer in that office for the duration of my time there personally raising over $1,000,000 in investment dollars by bringing on board limited partners from cold calls! And I got to work on projects that included Executives like Lou Perlman - Author of Bands, Brands and Billions and inventor of 'Boy Bands" who was going to be coming on-board for a fairy tale themed rock musical and who gave us a Christmas luncheon inspirational send off - of course that all changed when his dominoes fell and he was subsequently jailed....that for another day!

At any rate I don't forget what it is to try and manage my workplace / income safety net system alone with kids, and to that end this bold woman's ad initiative speaks to me and I will indeed hire her for a few extra bucks a month in her pocket so she can provide for her kids.

Moral to the story is.....Pay it forward.


Speaking of youth I've been working on a couple of projects connected to youth lately including Jazzled's upcoming launch as well as resurrecting the "Tiny Talent Tom" show live and perhaps an online-live version to come! Stay tuned!