Making An Elvis - A Reality Blog on the road to Collingwood

It Occurred to me that if I didn't do the Elvis Festival in Collingwood soon as a performer, I may run out of time to be able to pull him off effectively. I've always been able to do his voice pretty well, I thought, and have been told there is some resemblance, so with this in mind I simply mentioned the fact that I was thinking about it to a die hard fan and regular festival goer and then got her best impression of a take-away close (sales term) on me by "assuming the deal" by asking certain assumptive "closing" questions such as,

" So what songs are you going to do?"

"Well what songs do you think you're going to do then?" she responded. Ha.

At any rate, after some thought, I decided to go for it and approach the task like I would as if preparing for an acting role. I started seeking out photos and footage and asked my new " Elvis Adviser" Linda which songs she liked and which performers stood out to her at the festival and why. After all if I'm going to do this thing I want to try and do it right. Linda has always enjoyed when I've done Elvis over the past several years, always at me to perform more often and even closed the deal one year by having me croon to her mom for her birthday! When I first raised the possibility with friend Linda she wasted no time in checking into it and found out I needed to register within 2 days or it was over before even starting... Talk about a pressure sale! Ha!

Upon listening to the what she and some others had to say regarding song and era choice I decided that although I have the 70's Elvis suit and it fits well, that I'm just too skinny so with this as part of the reasoning, I decided to do earlier Elvis, and will scout out another outfit for this. After much consideration I decided that for the first time out I'd pick songs I know quite well - ones that I can really feel when I sing them and that I feel I most resemble Elvis singing - after all the contest wants to see as close a rendition to the real deal as possible and so with that in mind I chose I Can't Help Falling In Love, Don't Be Cruel and Blue Suede Shoes. I went back and forth a lot and considered a GI Elvis song as well as doing Jailhouse Rock but in the end decided on a first go round with familiarity. 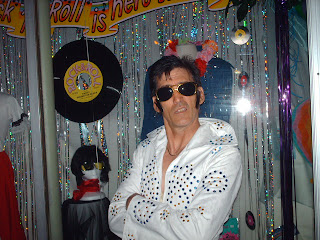 Of course I've been to the Collingwood affair before and it is a good time especially if you're dressed as Elvis. I decided to wear my Elvis suit the 1st year I attended and everyone wanted my autograph as I walked around..it was hilarious...One time another Elvis comes running up to me and says

"Hey, how you doing, have you seen Subway Elvis?"

"No", I replied after a slight hesitation as if I knew him, and he went off in search after thanking me.

Subway Elvis, was of course, renowned at the time because he played in the subways of Toronto getting known after some media coverage. I felt slightly guilty by taking all the glorious accolades that went with being "an Elvis" but not performing. Of course I have performed to Elvis many a time including even Elvis-ograms at one time. Hey, I'm a single dad, we'll do almost anything that pays!Ha!

Another year at Collingwood I had a group of no less than 100 Japanese tourists who wanted a group shot with me, and then afterwards whenever I tried to leave another would want an individual pic with me! Ha!! My only regret was not getting a copy! It was a challenge to stay in character at all times however, as if you look the part people expect the goods...so "thank-you very much's" became part of my routine as I ventured through the festival. You buy a coffee, thank-you thank-you very much.. a soda..thank-you thank-you very much...you get the drift - people in line behind you and everyone you run into expect Elvis! Ha! At least if you're performing you can hide backstage. I guess the only time I won't be in character come to think of it is amongst my fellow Elvises! Elvii? Whatever.

Of course I grew up too young for Elvis' peak however I did watch and love his movies as a kid and later on came to appreciate him more - especially as an actor where I feel he could have done more given a chance at serious roles. Elvis also grew up dirt poor and had a heart for others and I saw some parallels to my life in his which has helped inspire me to really try to "become Elvis" for this event, including surrounding myself with Elvis stuff.


Upon registering for the 2012 Collingwood Elvis Festival I was informed they needed a professional headshot in Elvis garb, and with little time to lose, I went to work by first calling a friend who is schooled in professional make-up who told me what to buy after which I had to apply myself with a little coaching from my giggling daughter who managed,

" This is the most macho thing I've ever seen you do", between breathes, as I struggled to put on eyeliner. 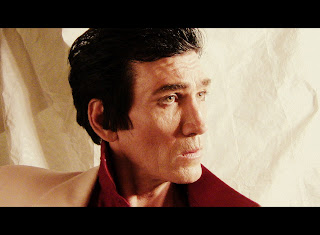 I somehow wangled to get everything in on time with a little help from my daughter Brittany, Linda, as well as makeup aficionado and DJ extraordinaire Hungarian Pepper, although I actually had until June 1st for some info but it's all in now! The last item I needed to decide was a  stage name and went with "Best Of Elvis" as I'd been the Elvis on City TV's long running Speaker's Corner and its 10th anniversary "best of" show, so I figured why not? It's either that or Skinny Elvis and I don't know how they'd take that one! To top it off somehow I was able to snag a small cottage for the duration of my Elvisarama in nearby Wasaga Beach after a brother taking over for another who just died and new to the biz had not yet booked everything during the usually sold out time! It was fate and I look forward to tackling this 'role" with vigour with the expectation of presenting a viable Elvis product in the end.

I will videoblog the "Making Of An Elvis" right up to and including the Elvis festival in Collingwood July 26-29 so stay tuned and...watch some exciting stuff like me dying my hair and applying mascara for the first time...Thank-you...thank-you very much! very much!

The Heritage Art Contest sponsored by Newmarket Town Hall is still on display at the Recreation Department on Mulock. Every piece in the contest is for sale. Our (Changing Silently) entry is priced at $350.