On The Run Comedy Tour to stop in Newmarket

Recently the promo and entertainment providing team TPE hooked Stellar Hall & Event Centre up with, that being 90 Nickel Entertainment and Arthur Jr Music, held their latest installment in an array of entertainment they've been bringing to town, featuring a night of live Hip-hop performers.

The event which was originally supposed to also feature headliner hip-hop artist FREEWAY, one of Jay Z's original crew, was a success despite a less than the usual stellar attendance - mostly because main man FREEWAY couldn't make it due to a murder in the family. Go figure. Regardless, the performers on the night put on a great show with rappers, free-stylers and hip hoppers coming from as far as Scarberia to get in on the deal and an opportunity to bring it to Newmarket. And bring it they did yo.


I once asked a hip-hop artist what the difference was between a hip-hopper and a rapper and he said that hip hop was an attitude. I think I get that now after a night of watching the performers and how they encouraged each other to support the other artists etc. It reminded me of a community support team...a culture even...and maybe that is what he meant by it being an attitude. Cool. Or Dope rather. 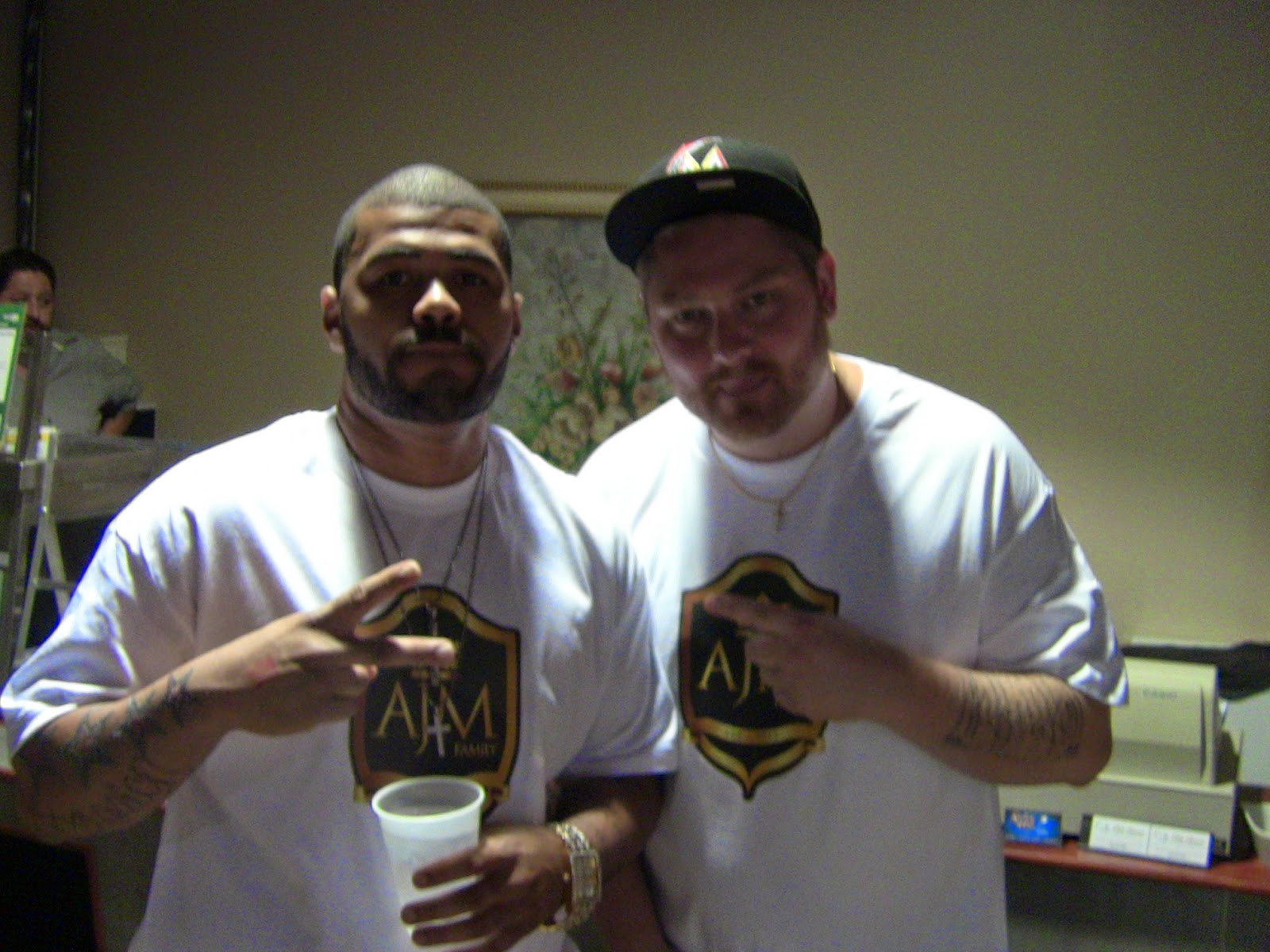 To my liking, the back up semi headliner of the evening, Rapper, Prince P, was not at his best this night. Good, but not his best. He seemed rehearsed yes, polished yes, but he also had some back beat vocals on the track which sometimes seemed to override the stage vocals as his voice seemed a bit tired this night, and I wanted to feel more emotion - not motion - go into it. In other words there is going through the motions and there is projecting your emotion or feeling, and I wasn't feeling it early on.....until the towards the end when a free-style-like collaboration, including with Maurice Weeks himself from AJM FAM, seemed to get things / him going and that finally upped the energy in the house. Weeks and the FAM belted out a few numbers, including the newly dropped single, The Payment. The performers by midnight had gotten right into it, transforming their energy into the room to bring it to a fevered pitch as people continued to arrive - and no one leaving!

Stellar Hall staff did a sweet job keeping the beers cold, and the fresh snack & deli menu was delish while the lighting was spot on - finally! - as it's taken us a while to get a grip on that part of the house atmosphere with what we have had to work with, but now with some additions it's down to a fine art and looks great,

Next up on the slate, Stellar Hall and TPE, in cooperation with the AJM FAM and 90 Nickel Entertainment, present the ON THE RUN COMEDY TOUR coming Saturday July 12. 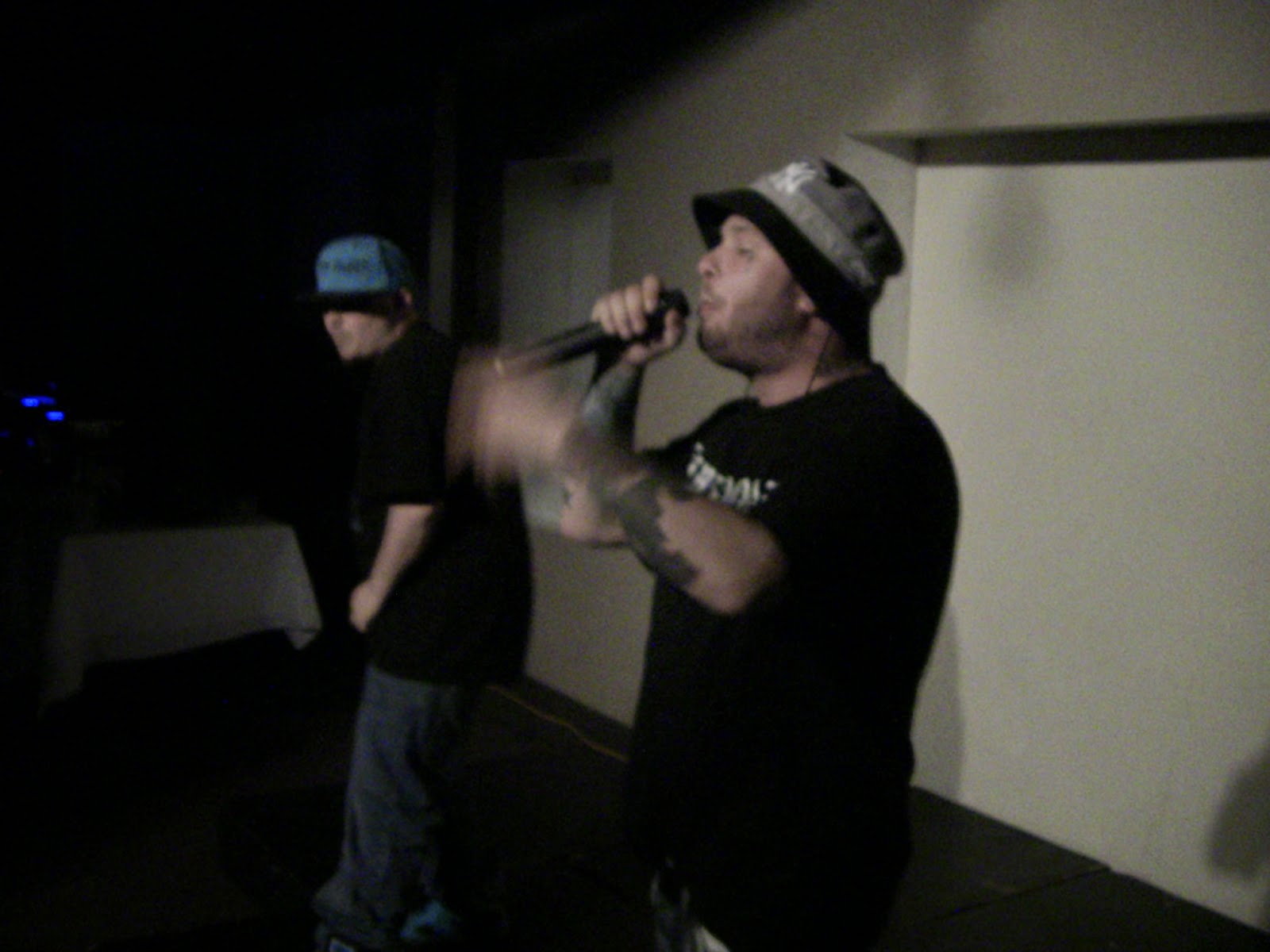 Playing a parody off Jay z and Beyoncee's "On The Run" tour this On The Run comedy show tour stop features headliners Keesha Brownie and Kevin Christopher along with some lead-up comedians to complete a great night of comedy, followed afterwards by some live music artists.

Have you got a Brownie!

Keesha Brownie is a Stand-Up Comedian who offers up a unique blend of her Canadian & West Indian heritage through her material. The graduate of Second City is also a Producer of some highly successful live shows such as; ‘Jokers Corner’ and ‘Underground Comedy Railroad’ with both touring from the G.T.A. to Montreal. 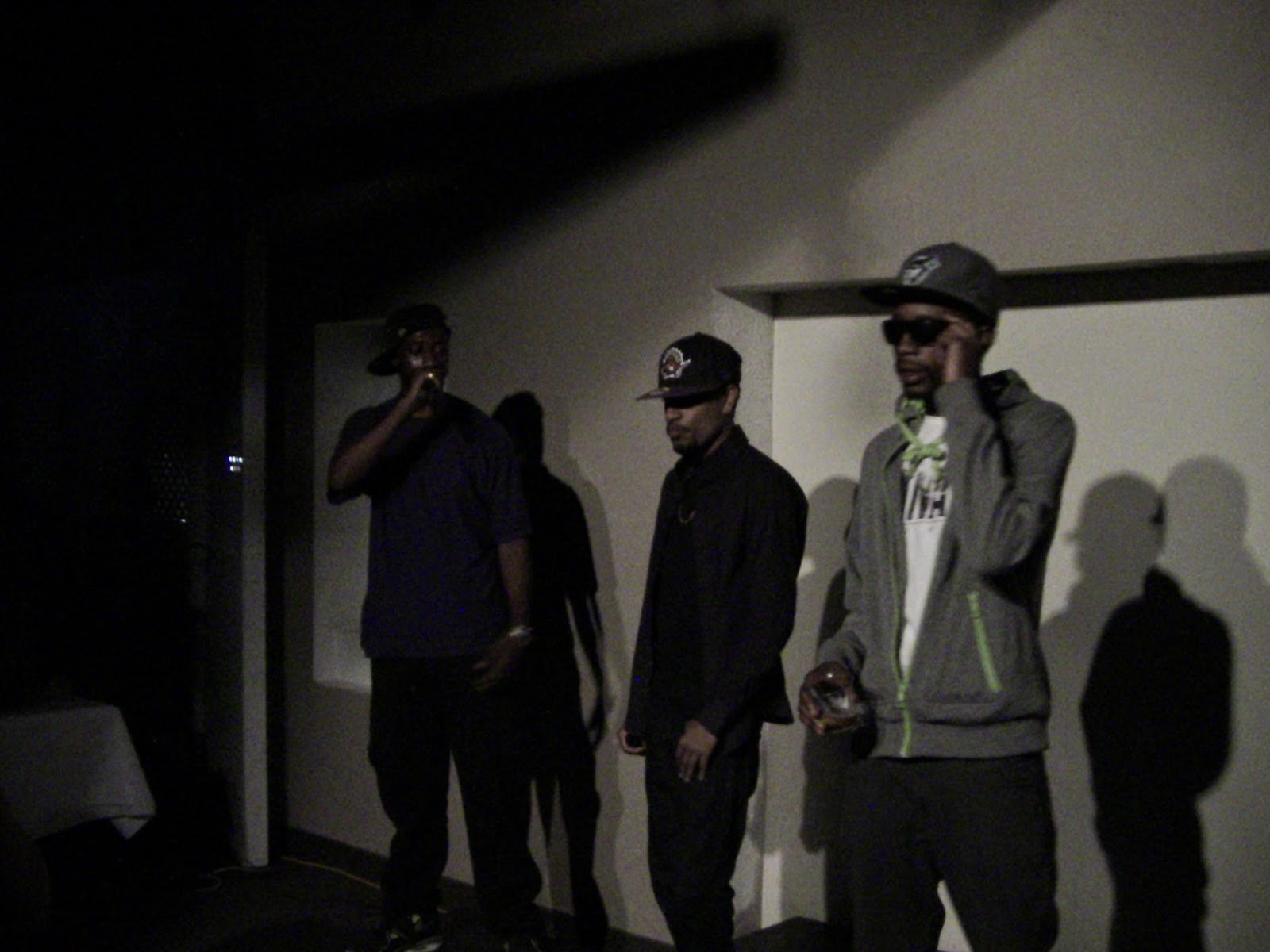 Kevin Christopher is a veteran stand-up comic, on-air host and actor as well as the voice of the Cartoon Hero Ninjamaica! The rap album available on iTunes was nominated for a ‘Tim Simms Award’, he's featured on the TV documentary special ‘Nubian Disciples of Comedy’ which aired on C.T.V., and Kevin's inexpensive life improvement tips’ led him to make appearances on the hit TV show “Buzz”! Wow.  Along with his hilariously bizarre stories and comical slapstick act-outs, Kevin Christopher, aka P-Nut, is sure to leave you with an  sore jaw from laughing so hard..don't say we didn't warn you! Warning may cause jaws to hurt!

Warning some material may be deemed offensive to some. Tough Titties. Lol.

It's the 10 year anniversary of same sex marriage becoming legal in Canada nationally. During the height of the same sex marriage controversy as it made it's way through the courtrooms to be made officially legal nationally, TP Entertainment & Productions was there on several fronts....firstly in 2005 TPE produced the world's 1st ever Same Sex & Wedding Show to offer nuptials at the show to world citizens - the 1st of its kind anywhere in the world - at Canada's largest Metro Toronto Convention Centre! 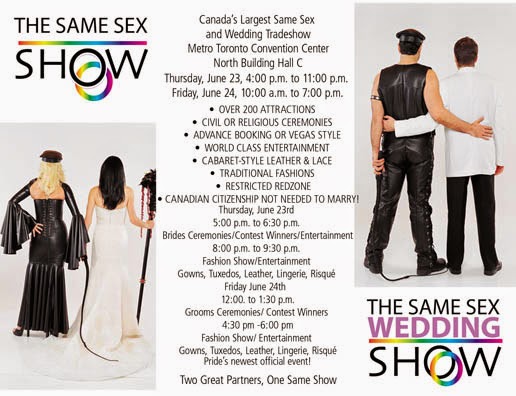 Through the process of putting the show together TPE recognized the controversy involved - including some bias in the wedding industry as well as the media at the time - and thus rounded up a documentary crew to capture as much as possible. As a result TPE has 22 hours of raw documentary footage dying to get made into a feature length film. 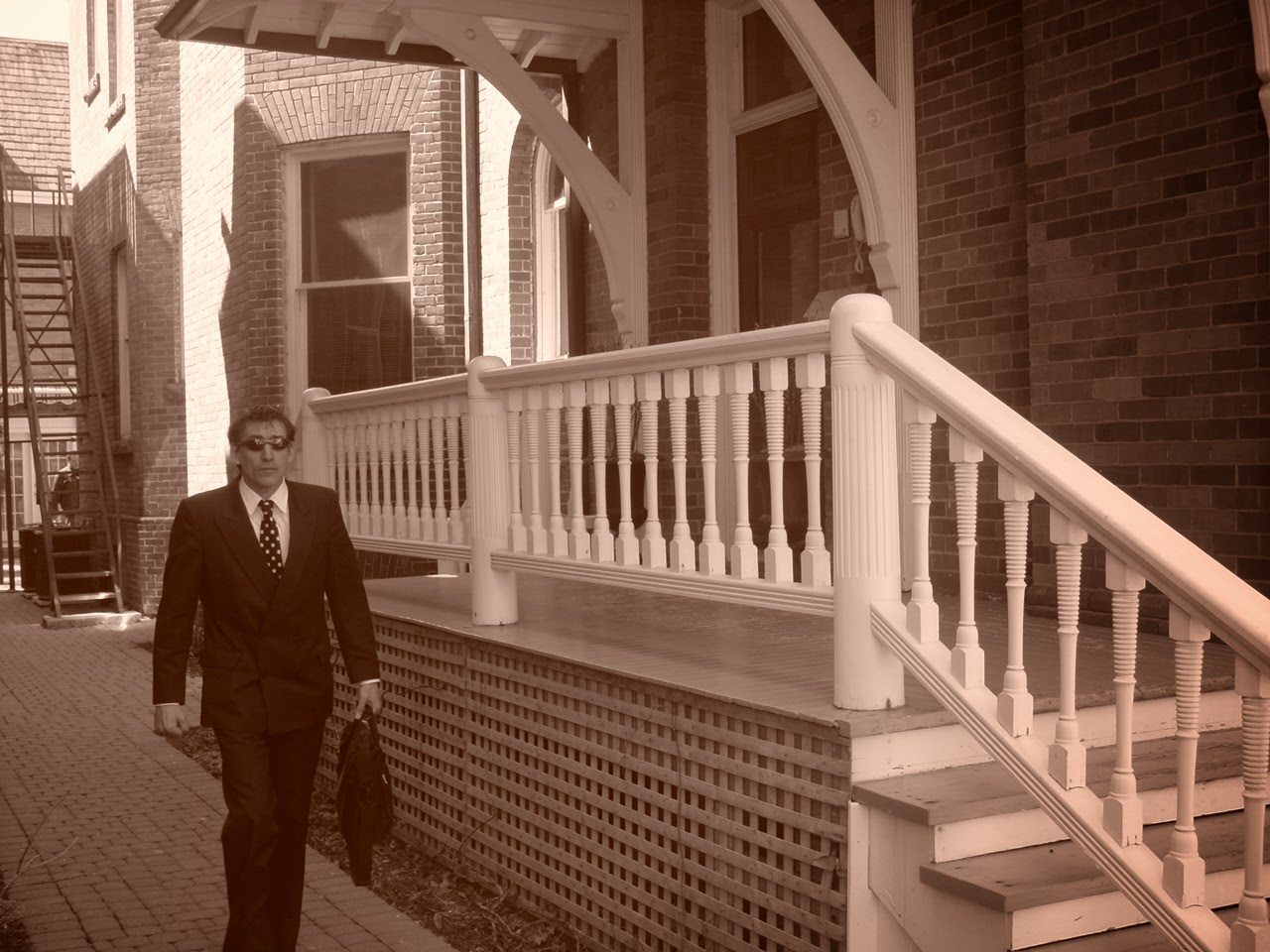 Upon viewing The Short Thin Pink Line again, I realized the importance of that time in our history and the need to be vigilante even now as we witness time and again attempts at suppression, such as the HARPER government (Conservatives actually voted 90-4 against) has recently tried to have same sex weddings from those coming here to marry from other countries called not legal - meaning the contestant couples we 'd brought to Canada from other countries to marry at our show 10 years ago....MAY NOT BE LEGALLY BOUND!? Wow...would only add value to  our future film. And destroy some marriages! Can we be held liable for couples who got married at the show should the Feds' position prevail in the future? I hope to cover this in the feature film version of A Thin Pink Line.

Controversy certainly swirled during the making of this show which I've captured much of on videotape - from the streets of Toronto, Ontario, Canada, to protests at Queens Park, to the Village bars, to downtown Torontonians on the street, to vendors and have documented their opinions from that time onscreen. I hope you enjoy the snippets I've prepared for your viewing in this 10 minute screener.

Here is a link to A ( Short) Thin Pink Line the documentary short movie screener I have produced from the footage captured 10 years ago during the making of The Same Sex Show, The Same Sex Wedding Show, Two Great Partners, One Same Show! 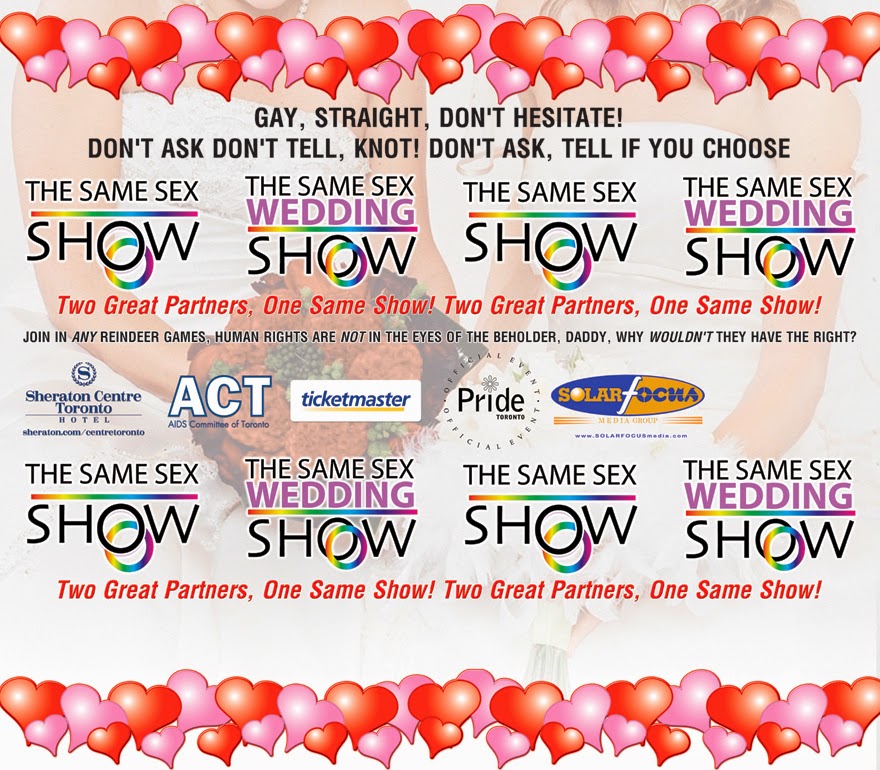 With the warmer weather comes the excitement of the entertainment biz as people naturally become more mobilized and search out adventures away from the winter lair. Even video and movie shoots ramp up production, now able to go longer and in more agreeable conditions for talent and crew.

Previously I'd written about the need for more live comedy in the north G.T.A. noting that no clubs exclusive for comedy exist, at least not north of highway 7, and to that end, promised to see if we couldn't hook up the right people together to make it so - and I'm happy to say that's exactly what seems to now be transpiring, with TPE connecting Stellar Hall and Event Centre, located in Newmarket, Ontario, Canada, with 90 Nickel Entertainment as well as Arthur JR Music.

These guys have been combining their talents to produce some top notch live shows - an infusion of which has been in dire need in the area - as one gets stuck in "same old, same old" mode here. What I mean by that is often clubs in Newmarket, Aurora and the 905, are reluctant to bring in any entertainment outside their "norm"(classic rock covers), and certainly not original music from some unknown out - of - towner. No local followers is their limited thinking with places often changing event nights when they don't seem to work immediately, instead of building and supporting them. Everyone wants instant everything. Now!

So when a promoter also brings along a slew of followers and they have a stated mission to seek out and present top talent only, it's a formula that can and has been very effective, and will continue to be as they fill that craving patrons do have, to want to see and hear new exciting tunes and talent from the ground level and up. The recent Talent Search Tour show, held also at Stellar Hall, is a good example. This event showcased scouted, up and coming top talent, and featured headliner draws such as Glass Ampp who rocked the place and band's manager and former Canadian Idol judge Farley Flex. That show had stand up comedians, bands, and hip hop artists, and was a dope show in itself.
You can read all about it and see the pics here!

That show got the ball rolling and the minds whirring, and, as anyone knows, once event promoters / organizers get together visualizations begin to emerge and it didn't take long for the guys to visualize what I saw, that is a great venue for live shows and also very suitable for comedy shows so we hope to coordinate some bigger names in the future to that end to this venue.
Who knows maybe Steve O. or someone along those lines those A List Lines anyway. 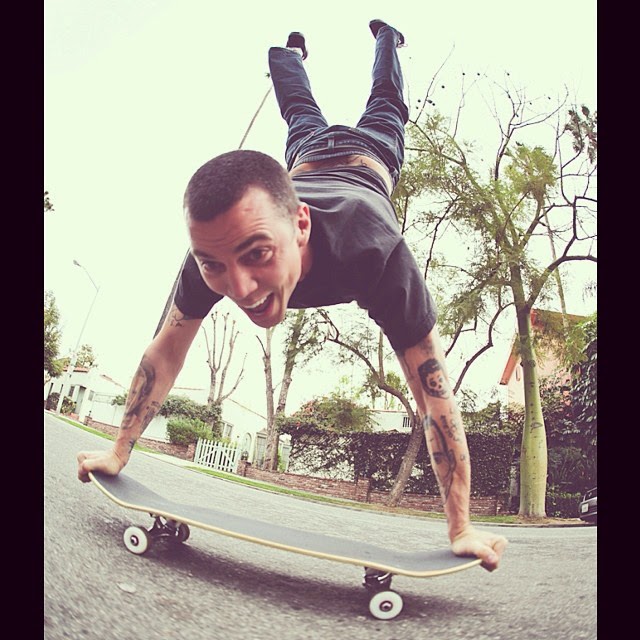 The next shows at Stellar Hall by AJM FAM - and 90 Nickel, who also perform & record, with AJM FAM having just released two singles Love What I Do and The Payment on video recently, produced by Captured Film. The Stellar Hall show will be headlined by one of Jay Z's original crew as FREEWAY comes to town Friday June 27 2014! Look for some more Stellar Entertainment to come out of this crew in the near future and stay tuned for some stoking shows in the works for the future..comedy, music....who knows who they'll get in the future but the venue has been found!