I ran into an old friend and colleague, Merlene Samuels - Cephas, who has run Spotlight Theatre School out of Newmarket for the past "umptine" years (which equals about 26) while attending the annual local Santa Claus parade the other day. I was actually down that way to cover (P.A.C.C. News Report) Occupy Newmarket which was slated to meet at 11am at the Fairy Lake Park pavilions, or so I  had thought, but as no one was there when I'd arrived I'd wondered over to the nearby parade, having been some mention of the group possibly joining it the week prior at the first general meeting. Turned out I was 2 hours early. Ho, Ho, Haa! As the parade ended and people disbursed, I began to walk up the still closed Main St where the TP supported 'Friendly Neighbourhood Youth Road Hockey Challenge" was also held, and where the "Spotlight Singers" had kicked it off with "O Canada" this past March Break, when I suddenly heard my name.

It was Merlene. I can't actually recall how we first met, but I do know I had both my kids in her theatrical school at one point - Hey! My son as Daddy Warbucks!? Who Knew! Ha - anyway I was a single dad and producing an improv show for tv and live shows then, as well as attending film school, so it was a jugglers life for me at that time!
Upon graduating I approached Merlene about starting a class that focused on acting for TV & Film as well as the tech side of productions, as I pointed out that screen acting was very different than for live theatre and we'd include producing a "movie" at the end as part of the parcel, an idea which was ahead of its time with the finished version edited manually (via my fresh-out-of-film-school skills!) and shown on VHS.

Merlene and the school embraced the idea and it was a fun time for me..of course they also managed to rope me into committing to being a principal performer in Spotlight's Adult Troupe's performance ( I played Gus Schultz a big time music Producer! ha!), a musical complete with dancing which I'd never done professionally or otherwise and which gave me some apprehension but I think I pulled it off without embarrassing myself too much and the crowds seemed to love the show, so I guess we did okay. I even donned my Elvis suit some days prior, and stood on the street "thank-you very muching" and directing traffic towards tickets while pointing to a rented registration sign between croons! Ha. One time Reverend Elvis Baxter as he's known world-wide pulled up and asked me to do a 'thank-you, thank-you very much' for him, which I did, to his reply - " Yup that's pretty good" or something like that - Ha! As if I'd possibly soil poor Elvis' image by being road-side - meantime he's using impersonations to grow a congregation! Ha! Hey, more power to him, whatever works! Funny, he never mentioned God though! 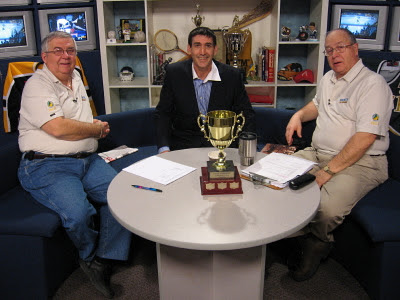 Tom appears on TV to promote TP sponsored annual youth road hockey event  A move to ban road hockey locally was squashed in part by pressure from TP in the media~!

We now have the new web site and design template built. The blog has been modified to reflect our design changes.
Email ThisBlogThis!Share to TwitterShare to FacebookShare to Pinterest
categories Graphic Design, Internet Marketing, Marketing, News

Okay maybe there's no Blog-A-Thon happening...I made the term up, but I'll bet at least a few people's eyebrows raised at that one while briefly contemplating that it might be real and possibly the next, next big thing! Ha! At any rate I've got your attention and that's good...I think! So welcome to TPE's official blog launch anyway!

"the biz" quite some time in a number of capacities both before and after film school... in every conceivable fashion almost, from Actor to Performer to Director, Producer, Associate Producer, TV and Radio Host to Feature Films including Miracle Dogs with Kate Jackson, Hansel & Gretel with Howie Mandel and Taylor Mummsen, and SuperCross the Movie with Lorenzo Lamas,  TV and have done live theatre and stand-up comedy and even Camera
Operator / assist and P.A. in my days on W.T.N.'s then top rated Decorators Challenge and while a single dad full time to boot..So yea! I've got stories ..and obviously I'm a good juggler ha ..well that's debatable..but I'm pretty good with voices and wacky characters though and I've had to play a number of ridiculous roles over the years. I was playing Ornery Scotty Mctavish,  long before Austin Powers made it fashionable! Ah'll Tell Youuuu! My latest character is Thompson Williams a bumbling British reporter from the BBBBC whom is currently Stuck in Canada!

Some years back, I remember having to bring my son and daughter into rehearsals and to shows when I was (original) producing ( writing and feature performing!) the Canadian Improv Showcase, a live improv show which I co created and took to TV before walking away in disgust...having hooked up with an idiot out to appease his ego and hog the spotlight....well ok it was only cable but I would have taken it further with the right creative partner. I did get a mobile production truck to come to the theatre to tape it and had a live audience who paid to boot! Ha! Now that's creative producing my friends and I was in film school at the time!....I've done gigs from standup comedy to plays to tv and film to playing  "Gripes" - an exaggerated version of hockey's Don Cherry I do - to (some may recognize me as)  Elvis from the "Best of Speakers Corner" which they used to play often.....and before any of that I wrote, produced and hosted "Out & About" for Shaw and Rogers cable for 5 years while writing 2 columns for CoverStory Newspaper..and of course before my "single-dad-hood" took a reality foothold, TV Show's like Forever Knight, Top Cops or Secret Service among some.

Of course this was all going on prior to me getting full custody of my kids some years back! Ha...I mean how many bands could I review and restaurants for my "At The Clubs" and "Local Flavour" columns with kids in tow.?! Truth is I did bring them on occasion to restaurants I was reviewing and I'd write about portion sizes and whether they had high chairs or deals for kids or not!