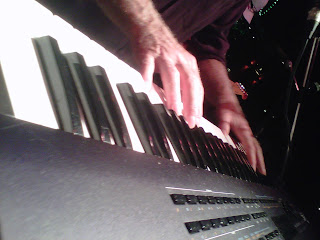 Wow, after a night like tonight it feels good to be in this business. I live for new discoveries and crave originality and on those fronts I scored large tonight, finding some exciting new finds to add to the roster and who have the talent to go places. I also found some other role players who came out to the open stage formatted night to fill some theme nights upcoming, and the atmosphere in the room was absolutely electric as the Good Times Bar & Grill staff scurried to keep up with the windfall of business!

I'd popped in to Good Times early first to check in and remind owner Nawal about extra staffing for that night in between placing the sandwich board sign out for them. Doh! I'm old school when it comes to promotions and believe in optimizing every tool available, so even the sandwich board sign - to me - makes a difference, especially when you're trying to help establish an ongoing event. 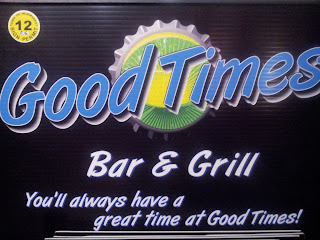 The opening country band  was already playing upon my return to an attentive audience and the place was a buzz with activity - the wafting aroma of Good Times wings and nachos platters filling the air. Meantime the father of some new talent I was hoping to see, GEORGIE,  approached me to let me know they were there and not long after Ray Yap from The Yappers arrived as well who I was meeting in person for the first time. I need to do that to get a feel for potential talent because you have to know they are passionate and dedicated and he sure is.

The Yappers, have a very unique sound and in fact may indeed have their own genre. It can best be described as reggae-rock with a country twang - even some blues overtures - but definitively not ska and certainly not just reggae as it contains often the guitar solos of a rock performer or blues player, jumping to bass lines conducive to reggae and back again, and as ray told me, getting used to singing when you're on an upstroke of the guitar, such as the reggae beat, is not an easy task and something other musicians can appreciate. Ray was excited about the fact that they had some airplay and exposure on British radio that day and indeed they are beginning to amass a considerable following considering they've been performing live together only since January! People are really digging it - especially the University set - and bookers can't get enough of them. There is something here. I feel it. This could be one that goes to another level.

Ray seemed surprised when I pointed out his music influence / style seemed somewhat connected to Sting's The Police - like a revelation had just gone off - and he grew animated replying, "You know something you're absolutely right. No-ones pointed that out before." Anyway, they excite me and so I may take on a bigger role than promoter because of that, as well Georgie too is an exciting find. She is a prolific writer of her original works and the feeling oozed from the young lady during her performance this night. To me that makes all the difference - the passion. The crowd lapped her up and exploded in applause after each song as her proud mom and dad sat stoically at the back looking on. Good job!

I came across Georgie after someone recommended I take a listen on one of my online postings to which i replied that I give opportunities to talent but I wont chase them - they have to want it themselves - and she did! I'm looking to put both into Good Times on dates in October so watch for that and as well, meantime, if you happen out to the Hope Festival in Pefferlaw for Sick Kids on Sept 14 you can catch her there too. 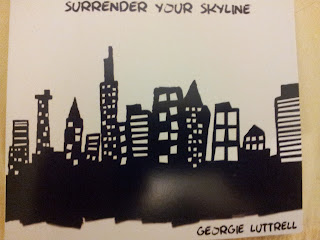 Cover bands / tunes have their place too and to that end another excellent performer, a local legend,  Freedom Chuck  known as the Man of a Thousand Songs, also came out and in talking, discussed an idea for him to do a Doors tribute night which is a cool idea. He's a good fit for the place too because as a one man show so to speak - well - frankly he's affordable. Ha. He's also talented and been involved in a number of shows with me before. Ironically as I mentioned The Doors Night theme to Ray he laughed and said you're not going to believe this but one of my biggest influences was my uncle Phil Chen who is currently plays bass for ......The Doors! The Chines-Jamaican bassist has also played with Bo Diddly, Rod Stewart, Pete Townsend and Jeff Beck among others! Wow..you can't make this stuff up. And, yes, Ray's uncle loves the music he's making!


Regular Good Times Thursday Night Open Stage hosts, Steve, Doug & Wayne, took it home on the night with accompanying players rotating in and out to round out a spectacular evening of entertainment and banter! My buddy Brad dropped in as well who I hadn't seen in quite some time, and who now hosts an internet radio show Out & About and once co-hosted an entertainment show with myself for Shaw and Rogers cable tv, interviewing the likes of Mike Bullard, The Good Brothers, various Comedians, Music Producers etc. and hooked him up with some talent for his radio show too!

So as I said it was a great night for music, conversation, connections and friends.Stay tuned for more or join us on Facebook or Google+ and get in the game!! 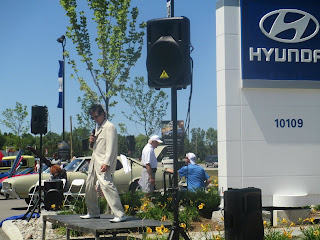 Well summer has been zipping along and before we know it we'll be complaining what a short one we had. I've tried to keep as busy as possible whilst maintaining a decent summer, and so far I think I'm failing - on all counts!

I passed on performing at the Collingwood Elvis Fest even though they offered to pay my way and had paid satellite shows. Just couldn't get motivated for it this year after last year's let down being judged in a wrong category. Maybe Wake Stock in August? Ha. Sure. I'm there. Not!

I did manage to attend Edge Fest on the same day that I was auditioning for one of the more weird gigs I've attempted to land for TPE. At first they'd wanted impressionists but somehow I apparently influenced them to look at genetic "characters" too such as a pirate etc. This confused me somewhat, as on top of it all you had to read from a script that would be a snap shot of you calling an online bingo game! The idea I guess is to spruce up otherwise boring straight bingo calling, and at any rate, I read it to the camera as Elvis, Don Cherry, an idiot, an ornery Scot, a wacky woman, gangster..and forgot a few like Thompson Williams! Not sure how I fared yet as they had said they'd let me know this week but I can think of better ways to 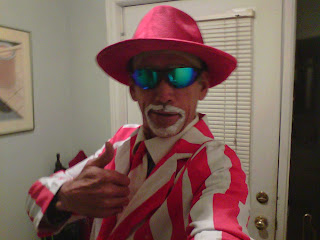 Anyway after that I went straight to the Edge Fest concert still dressed with white pants and shoes on and a white and red striped jacket in my bag that I'd used for the Don Cherry bit in the now pouring rain. I was supposed to meet a buddy at the gate who'd won free tickets and who was going to drive. Of course, he was already in but allowed to the gate to get me in just in time to stand for the next 6 hours in one freekin' spot in the pouring rain all so we wouldn't lose our frickin' spot to hear Monster Truck  who seem to have a bit of a Pink Floyd influence, and later the Luminaires, but they were crap. Anyway it's not worth the battle to protect the bag all night long and fend off attacks on my hat that everyone seemed to love, along with the jacket, just to say we did it! Rock on!
Thank god for the umbrella hat buddy had for me! 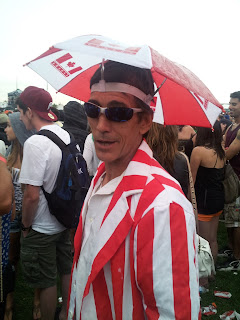 I've kept up with blogging and online stuff too though, and good to see Jazzled moving forward with the youth oriented social web-hub having had its first contest winner of a Kobe Reader and new website beginning to take shape.

And one must pay bills! I finished up a clients t.v. show proposal package which originally I had geared towards industry funders but which she had wanted amended to include private investors, so I simply added a limited partnership to it's structure.

And why can't one have fun while working? To that end I agreed to M.C. a hockey banquet complete with stand up comedy which of late of taken a returning interest. I tried out some new material out at a recent open stage in Newmarket and it was very well received (they laughed hard) so I know I can do it. It's a cool feeling when they laugh where you think they should and are comfortable enough to add to it or improvise on your feet. A rush. It's a challenge too, and I guess something that's been missing of late for me. The motivational factor. A challenge that any age person can tackle and succeed at, oh yea, and they are paying me too, that helps. Years ago I had once been a participant in Canada's Funniest New Comic Contest losing to Jeremy Hotz. He won peeking out from his hand to deliver his zingers. Then I got full custody of my kids ending that path...for then! 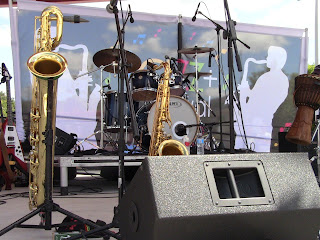 The Newmarket Jazz Festival was well attended for a first timer but lacked much actual jazz music. The day I attended I spent four hours there and heard not one song. Too often blues, rock, calypso and everything else was played - some really good music - just not on theme. Too bad for this year, but maybe next year they'll invest more time to book some more jazz now that they know if you simply build it they will come!@.

Come on! Surely there has to be something more to do this summer before it too late than these same old, same old themed events....The Tastes of the Danforth Festival is coming up attracting over 1,000,000 visitors and I guess Newmarket's attempt to mirror it would be the ' Multicultural Festival" upcoming, but again, been there done that. I need something different!

There is one $$deal out there worth checking out with something for all ages at the Festival of Friends or Friendship Festival, whatever in Fort Erie this weekend and it gets 10's of thousands of people over 3 days and is free with big names like Chubby Checker...all free..!

Here's a detailed list of Ontario festivals for August! ...Pick one and go!