Sometimes during the course of producing a live show you begin to feel as if you should be documenting it and to that end, after being hired to produce " The Same Sex Show", I found the elements were very powerful and knew that this being a time in history that will be examined and an issue with a long shelf life - same sex marriage that is - that this was worth capturing and I did, putting together a documentary crew from graduating film students resulting in 22 powerful hours of goods sitting on my shelf unedited as yet!!

During the height of the same sex marriage controversy, as it made it's way through the courtrooms to finally be made officially legal nationally, TP was there on several fronts....firstly in 2005

TPE produced the worlds 1st ever international Same Sex & Wedding Show - the 1st of its kind anywhere in the world at Canada's largest Metro Convention Centre!

During the process of putting the consumer show together, TPE recognized the controversy involved, indeed including some in the wedding industry as well as the media and thus rounded up a documentary crew to capture as much as possible. As a result TP has recorded 22hours of raw documentary footage from the period including protests at queens park, religious protesters, and people on the street as well as interviewed members of the gay community and wedding/same sex industry people dying to get made into a feature and held a show with that featured entertainment and speakers from the who's who of gay, lesbian, and cross gender communities. Hear more in our short pitch video.

Timing for this documentary movie to be produced is fantastic now since the HARPER  government has recently tried to have same sex weddings from those from other countries called not legal - meaning the contest we ran that brought couples to Canada from other countries to marry at our show....MAY NOT BE LEGAL!? Wow...only adds to the value of our future film but can we be held liable for these couples' distress should the feds' position prevail? And what of those couples? How must they feel perhaps being gyped of their marriages? Meantime TPE Prodcutions.com will be releasing a Short - Thin Pink Line - a 10 minutes snapshot of the 22 hours of footage we have.... coming up in Feb for a Valentines Day release! Stay tuned!

This is a project that begs to be completed and help show Harper he's got a tough road to hoe! 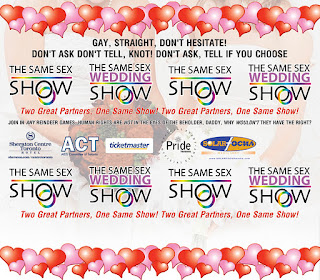 In Other related News ... You can get involved in the Producing of A Thin Pink Line's feature film through INDIEGOGO!

Watch for the short, Thin Pink Line, to show in York Region Ontario for the YR Media Playrs festival in 2015.