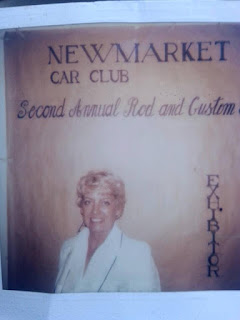 If you're a classic / car fan from the area, you may be familiar with the various car shows in and around town. The Highway 11 Cruisers Car Club host the bulk of them, including a Father's Day Saturday event held in a parking lot at Yonge and Mulock where one of their event sponsors, Parts Source, sits, while on Main St., on Father's Day Sunday, the Newmarket Car Club has previously featured the cars for the show there - however the number of cars in the smaller club limits Main St.'s event somewhat in size although the long running club has attendees that travel in from Barrie and elsewhere as well.

But imagine my surprise to find out my mom Mabel Pearson actually sat on the board many years ago!

I'm a bridge builder. Having been acquainted with both Car Clubs for a number of years now, and having promoted Cruisers' annual New years Eve bash particularly, I believe I'm just the guy that can broker having them together on one street - Main St - for the area's biggest annual car show and attraction the town has ever hosted - on Fathers Day weekend no less!
In fact I've spoken to both the downtown B.I.A. Chair Glenn Wilson and to the Highway 11 Cruisers President Danny Fachini in the past about adding the latter club to the Main St. mix since their two shows are so close together, as they kind of compete against one another so it would make sense, if possible, to do just one big show, and that is exactly what I've been working on! And they are both receptive to the idea. 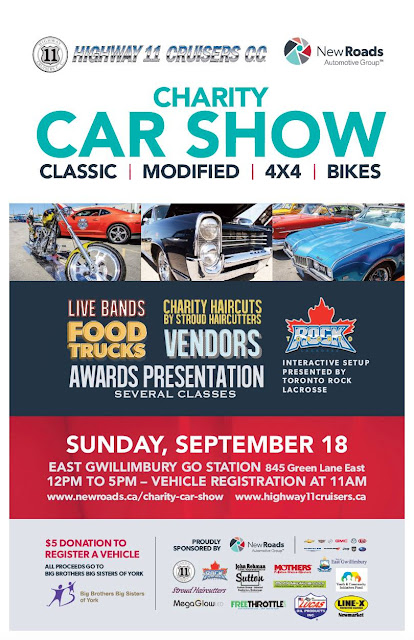 So much so in fact, the Cruisers could be willing to stop holding their Parts Source show that same weekend and bring 300 cars to Main St. to make it one of the biggest car show attractions in the G.T.A., if not the biggest, also drawing from all over York Region, Barrie, Brampton and the G.T.H.A.. Imagine a car show on Main with over 300 cars, entertainment and booths! The patios and shops would rock!


On top of that, I've even configured a way to add more parking! How?

The Cruisers end-of-season Sept show attracts up to 1500 people, and it's grown so large they were told they'd have to move from the Upper Canada Mall parking lot where they'd been for a number of years and so moved it to the Go parking lot on Green Lane. But, filled with cars for the show there is then limited parking. So what to do? 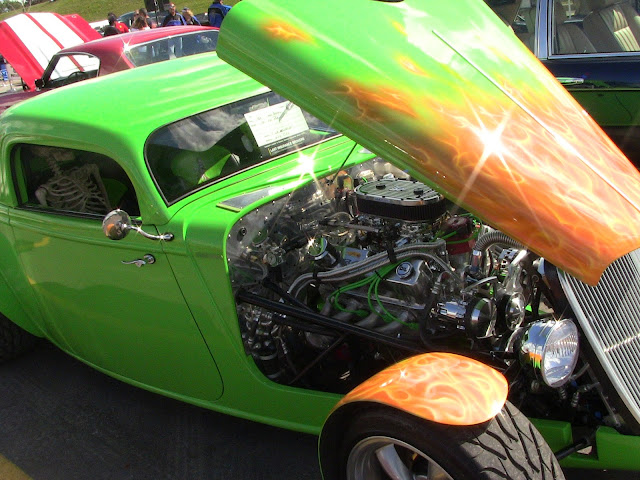 They created a shuttle service provided by one of their sponsors - a car dealership in town - and this is exactly what we'd do for an event on Main as excess parking could be added by shuttling people from the HUGE Tannery Mall parking lot on Davis Drive which sits empty mostly on weekends and evenings. Light bulb moment!

Yes, that's right, in one fell swoop and no $, I've just added hundreds of additional parking spots and dollars to the event for Main. We could even have the Tim Horton's Train making additional shuttles along Tom Taylor Trail which would make for a short, but fun, and scenic ride to the edge of Riverwalk Commons, where visitors can easily walk over to the event.

I, in fact, see the car show getting so large and renowned, it may be wise to add Riverwalk Commons to the mix for cars and booths, as I'm sure their various event sponsors including Parts Source, Maple Leaf Sports and New Roads would love the opportunity to be included for more exposure there. In past big shows the Cruiser's have brought attractions like the Toronto Rock (MLS) and other goodies to their shows along with their spectacular variety of cars and this show would become

a flagship town and Main St. event for years to come, attracting hundreds more to Main St from out of town.

I'm very excited about this and am itching to make it so. These types of special events are right up my alley having put on dozens of events myself including 20 in the past 10 years at Riverwalk and Fairy Lake and also at Canada's largest (Toronto) convention centre. Danny knows it, and he is excited about the possibility too, and I'm sure so too the numerous club members many of whom were in attendance when I addressed the issue at the Tuesday Cruise Night on their mic and who seemed like the idea of being in a show on Main. And we can look forward growing it each year, adding much needed extra revenue to the town coffers and the businesses - and is attractive to young and old alike!

Danny and I also discussed the possibility of once a month car shows on Main St. that would again include live street entertainment, like Bill Nadeau, which we could run on an off night such as a Monday or Tuesday to bring additional business again onto Main through the summer. Who knows? all we can do is propose it. 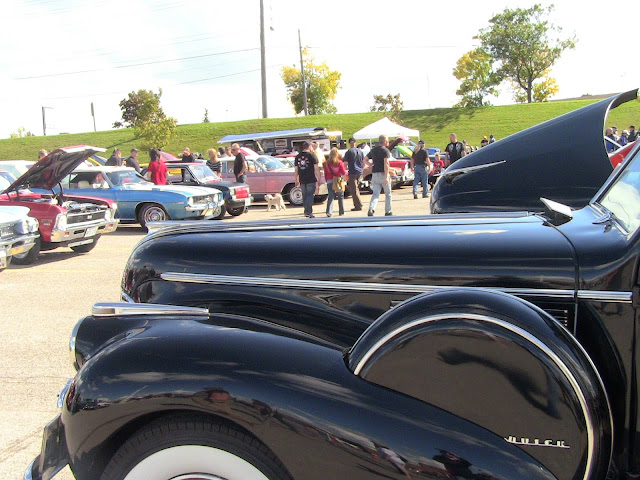 Tom Pearson... until next time!

With summer season winding down, I thought it a good time to reflect on the summer festival season, and if you didn't get out to see someone like Glenn Marais at a Music in The Park, or particularly to the Newmarket Jazz + Festival, which celebrated this year by expanding, adding the larger Ray Twinney Complex into the mix, while still holding some presence at Riverwalk Commons and on Main St on the Saturday of the long weekend event, then you're missing out. Kudos to the Newmarket Jazz+ Festival team for branding the location changes to ensure minimal confusion.


From my understanding, Colin James did indeed rock the place up at Ray Twinney Arena, as well as George Oliver, Brass Transit, George St Kitts and others, while outdoors, at the same locale, featured live entertainment for all ages across a number of genres. I caught a bit of the Mad Hatter kiddy's act doing various rock icon voices, and later Rob Tardik performed, and although it rained a bit through that, It was a blast! and i got to know the 88.5 girls better while winning a mug since I knew Garry Gamble was one of their hosts, as I used to read a blurb on 88.5 with Coverstory! 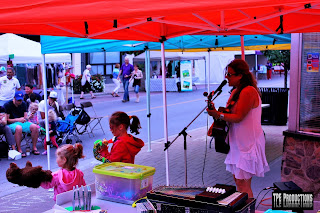 I had limited time to attend this year, but had a good time when I did and had also volunteered to help set up Main St. for the Saturday which included live street entertainment, vendors, games, and activities for the kids, as well as street-eats. Meantime the morning Sat Main St portion of the event also allowed for farmers market attendees to wander up should they wish after 9am, making for a festive atmosphere with the various patios and street grills set up and ready to roll. 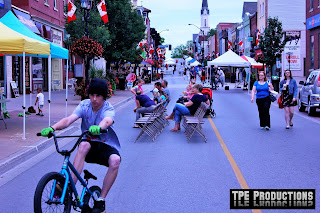 After intros, the volunteers set the tents up and put the chairs out whilst directing vendors to their spots, blocking off the road and setting up booths and activities for their own businesses and associations - all with a 7am call. Lol. Well as close as one gets with that on volunteer gigs. At any rate, the half dozen or so die-hards got it done while others took their shifts as they showed up, a true team effort, as not all could stay - myself booked out for 2:30 pm.

One thing missing, however, was more music elements, especially with the feature entertainers not coming on until noon. And perhaps we could allow for more vendors to fill some areas and add a few more interactive activities for the kids - something we helpers all agreed to try and achieve for next year.


The vibe and set up all in all was good, but a few key spots for busker type street musicians and adding some live entertainment in some establishments - such as Hesed Cafe which sports a piano, and Books N Things  Cafe which already hosts Open Stage's as does Cover Notes, are great spots for solo type acoustical acts, not to mention the various bar patios which would really give it a more authentic festival vibe I think. As I understand, one bar or two may have been included in 2016 which is a great start! It just needs be out there more and have several locations with the various pub and cafe dates featured on the schedules. 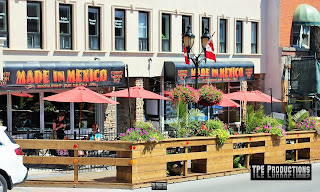 So more inclusion of those restaurants & cafes, beyond the Saturday, intertwined as part of the festival, is what is needed. In 2015, the Jazz+ Sunday had live entertainment at River Walk but if you walked up to Main St. you'd never know it was part of it. Patios sat fairly empty at times, no street players, no patio jams, no visible connection to the Newmarket Jazz + Festival - but I'd like to change that with more, advertised, feature performers, hosted at various Main St locations throughout the fest, thereby drawing more customers - and more late night goers - onto main during the festival to spend some disposable income there as well. Why not end the night rocking on at a place doing live on Main? And with patios also being more accessible to wheelchair users.


In fact, that is something I not only noted in 2014, but acted on in 2015, adding a keyboardist entertainer and singer to play on the Main Street, who added a vibe and reason to come down to the the most south extension of Main with less restaurants to keep it in the loop when the street is not closed off. This I plan more of, for atmosphere during street events. 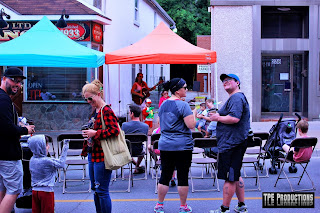 I've now discussed this and other ideas with not only some members of the B.I.A., but also with other concerned store owners and everyone seems pretty upbeat about the idea of having more Main St participation during the fest, and other attracting events, and I look forward to communicating with event organizers like George St Kitts who I worked the same bill with for a United Way campaign some years ago and now from promoting the festival, which I've done plenty of in the past, so I'm pretty sure we can get er done!  Stay tuned. 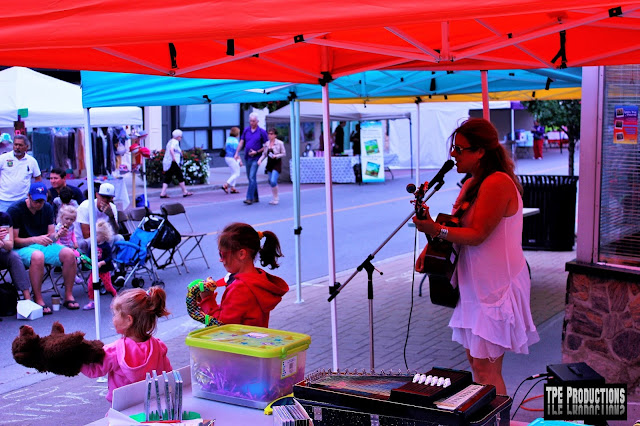 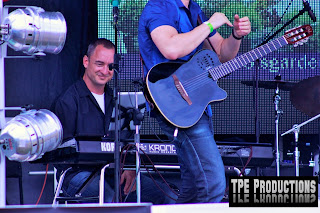 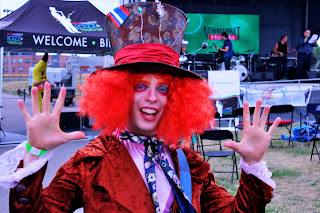 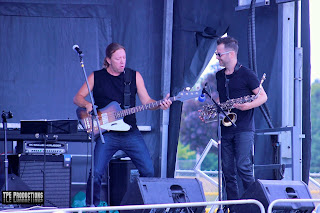 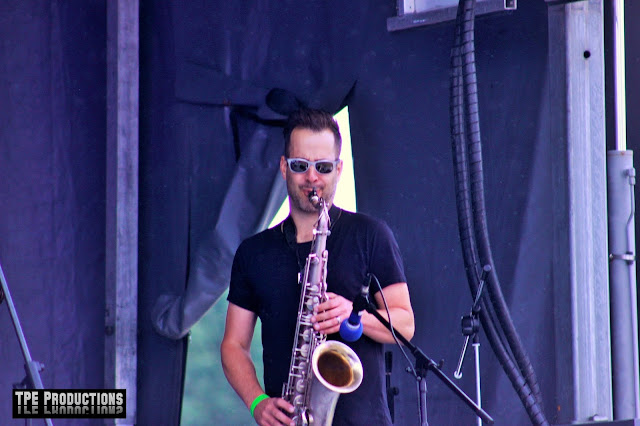 Tom Bits: Mixed review on the new location grounds at Ray Twinney Complex but more potential. Food areas need be made more accessible. Meantime if you missed the festival, a friend of mine has just opened Niagara Fall's only authentic Jazz Bar at a famous location on Bridge St called....what else? Harry's Jazz Bar!!

Watch for Beatle MAIN ia too... 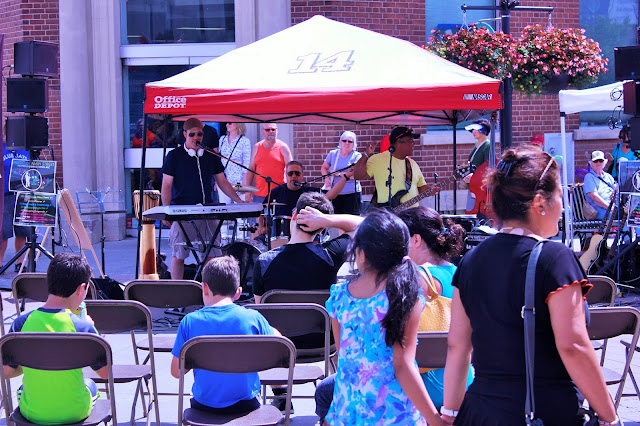