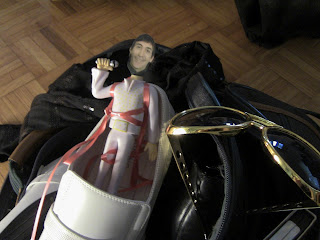 Elvis has left the building! What an experience the Collingwood Elvis Festival was! I think I was able to crack the Elvis brotherhood by belting out some okay tunes, but it was not without its moments including missing the final day from a lack of an available vehicle.


After arriving, I was dropped in Wasaga which is about 25 minutes from Collingwood the location for the event where I would stay for the duration of the festival, and from where I'd make my way into Collingwood each time I had to do a show or to pick up info. 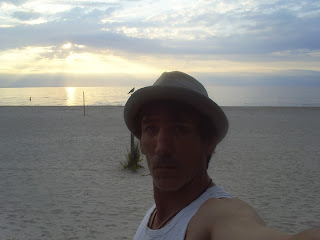 I arrived Thursday to sign in and pick up my schedule but it wasn't ready yet as they'd not yet changed the time to what we discussed before coming, then was told to go back to the office in an hour and it would all be straightened out as they'd have a new events sheet for me. It wasn't and they didn't, so I asked " But my first stage time is still 2pm on Fri correct ?" Yes I was told. "Okay then", I'd said, "I'll come back earlier tomorrow (Fri) & pick it up". Fine they said.Ha.

My shuttle arrived for Fri's show at a time already pushing it, as I knew I still had to make my way to the office, but wasn't too worried until after arriving and being told my new time would be at 1:21PM...it was already 1:15 when I walked in!

"What happened to 2pm?" I muttered to no one in particular...didn't have time to much anyway, as straight from there I had to make my way through a wall of people to the main stage  - with no time to spare! 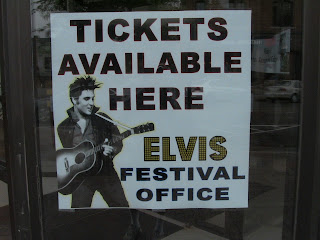 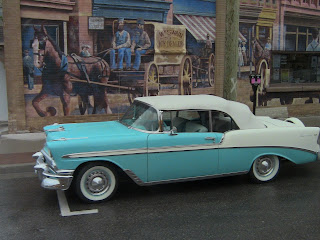 I'd barely let the stage manager know my name, when I was ushered to the "on deck" area where I had to struggle to stay focused as a woman bugged me to sign her program, and with me trying to get a listen to the live band I'd be singing with for the first time. As my name was called I strutted up the stairs and managed to quickly mumble to the guitarist,

"Is that the mic?" pointing to the one left backwards on the stand from the previous Elvis before walking off.

It all seemed a bit surreal, my usual pre-stage routine of going over the song (or show) in my mind and reviewing lyrics would have to be skipped. And then there I was "naked" on a stage with back up singers using an unfamiliar key, throwing me off, and with no monitors for me to hear myself sing! Talk about being thrown to the wolves...ever tried to sing when you can't hear a word you are singing along with off tune back ground singers in your ear ...and 20,000 people watching? It's tough let me tell you, so I was glad it wasn't the competition because it just wasn't sounding right, and at the time I wasn't sure why. Then the band played beyond how the song actually goes further confusing me, and I had to think on my feet to keep it going. In the end it was good practice for the actual competition (done with c.d.) but I would not have been able to do an entire show like that, and other Elvises were communicating the same concerns with me backstage at the curling club where our actual competition songs were sung the next day. We'd hoped it'd be different there and it was luckily.

After getting through that first fiasco I went back to the office where they finally had my schedule ready but when I got home and opened it I noticed the "free tickets" aloted me to one of the premium shows which is part of the deal when you sign up were for a time when they'd penned me in to perform and you weren't allowed to give them away! So once again on the day of my competition show, I brought this up and again was told it would be rectified if I could come back in an hour and again it wasn't as I left with the same tickets. I offered them back since I couldn't go(or give them away) but was told they'd rectify it and hold onto them. I still have them! 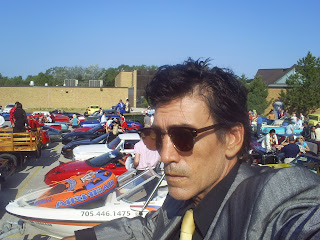 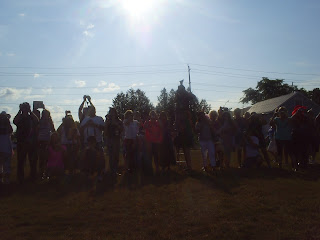 In between I made my way along with my "throng" of supporters over to the location to sing "Don't be Cruel", alongside the other Elvises, for judging in front of a live crowd. It was a bit nerve wracking but not overly as I at least had time to mentally go over the song and ended up belting it out mistake free and sounding pretty good. I guess the judges didn't though as I didn't make the semi final round (I'd find out the next day), although the other Elvis backstage with me seemed to think I aced it and so did my throng. Another said maybe you have to put in your time...at any rate I wait on baited breathe to find out what I supposedly did "wrong". Maybe the version I sang was from "newer" Elvis? Who knows I thought I covered it well and don't think I'd do it much different other than my mic was left wrapped around the stand, so when I went to remove it to walk around I couldn't, and had to then stay close to the stand onstage which may have cost me some dancing etc and eye contact. Next time Ill check that first. Even a female Elvis apparently looks and sounds more like him than I? Geez how masculine do I feel? Anyway I did my best and thank-you, thank-you very much. 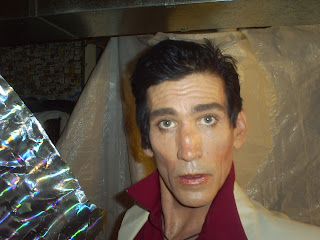 Sat morning at 8am of the Elvis weekend, I was first in a group shot of Elvii followed by the parade which is watched by thousands. This was fun allowing me to point at cameras and "thank-you very much" people along the route from my perch in a military vehicle, the highest spot in the parade! But with a youthful contingent having their way at our cabin in between shows, I was also struggling to get any rest. Hey man I'm not getting any younger and don't these 'youths" ever freakin sleep!!? 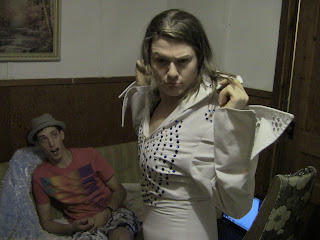 I managed to contain my disappointment and returned to Collingwood Hyundai where I was on the bill as a performer and where I finally got an opportunity to really belt some tunes out and strut my ELVIS stuff! I also incorporated some dancing to my tunes sung and rocked out to an unrehearsed " Hound Dog", having lead in with the story of my next door neighbour's pooch in my stand-up Elvis routine...Even here I'd been told all along I needed only 3 songs, but at Hyundai they wanted 40 mins from me so I utilized some stand-up comedy into the mix to fill in my time, and felt really in my element. I know I did well with one woman telling me " you guys all have the voice pretty much but none had the expressions like you(I) did", and so I'll take that away with me as a positive!

Still, with all the apparent screw- ups, getting no free shows to see, being shorted on my show prep , being blind-sided with 40 mins of material, and missing the final party, it was still all in all a fun time that my family (some) also got to partake in and enjoy, so Collingwood for that...Thank-you, thank-you very much! 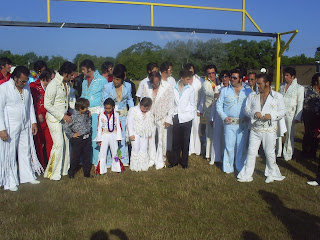 Tom Pearson has left the building..