Good Times Bar & Grill in Newmarket, Ontario has had their license suspended for reasons including playing a small radio/speaker, as technically they say its amplified music which they claim her liquor license prohibits. I attended the original licensing hearing 7 years ago and believe they've made a mistake here and that the provision referred to outside speakers only - not inside the establishment. A rumour they were serving until 4am (which later became 5) is not true either. It was the liquor inspector who sat with them until then. They hope to have it reinstated shortly. 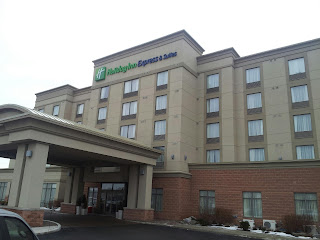 The person (2 of them presided) recording the original licensing proceedings by hand, was having a hard time keeping pace as I recall and possibly even hearing, as I'd repeated twice that I'd become involved (at the time) in that particular community surrounding the Good Times location via the Mulock Village Community Development Committee.But in reading the licensing comments later, I noticed they had me from somewhere beginning with a "B" even though I recall repeating it for him at least twice upon his request to do so.

A number of times he asked for time to catch up in writing, and as such, I believe when the discussion turned to being about the outside he was not aware that at that point the discussion was about the outside / patio area. And so when it was mentioned "no amplified music" he recorded it as to pertain to the entire place inside and out. After no complaints in 6 years on noise the supposed license " noise" loop hole was found by one overzealous resident and the fight was on so to speak.

In my 19 plus years in and around the hospitality industry I have never heard of such a severe sound provision.

At this writing I sit waiting to testify as they try and prevent me from doing so asking for a 3rd remand and consulting higher ups on every move it seems. They've already told a sound producer 0f 20 years with university education in the field and who's worked with acts such as Blue Rodeo to Stompin Tom that he's not qualified to testify about sound. Each play is calculated to discredit or disallow testimony that should be allowed for due process, otherwise we have chaos. And chaos is what Good Times owner Noel now has. 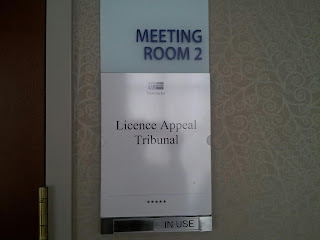 If you are a restaurant / bar owner you might want to stay tuned as these liquor boards have deep pockets of your money and have fought tooth and nail to keep me from testifying which they didn't succeed in doing at the end but tried to limit to one question.

I testified that although she may have had growing pains as an owner some years ago she's shown a willingness to work with the community as she bno longer accommodates All  Ages shows and heavy metal types of bands ( which I advised against at the time) and a distinction need be made between a karaoke per say and these other "noise producing" devises let alone the woman having her TV on which technically they can charge her for the amplification."

I also mentioned that when I do events with the town a decibel level stipulation is set and should you breach it you can be held accountable. I suggested if they wanted to limit her they should be more specific because not allowing for a bar to have any music, let alone even any restaurant, is ludicrous frankly and certainly not the intent of that provision as penned onto the original license.

Meantime Bar & Gill owner Noel is losing her business as this drags on.